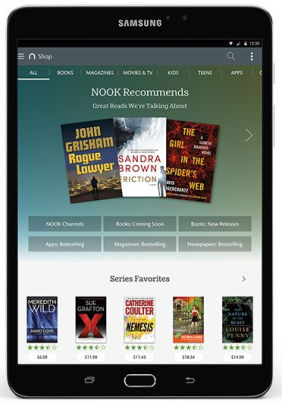 Holiday sales in Barnes & Noble’s Nook business fell to $41.2 million, down 25.8 percent compared to the 2014 holidays, according to new data this morning from the retailer — providing more evidence of Amazon Kindle’s continued dominance of the e-reader and e-book markets.

The number, which includes sales of Nook e-readers, tablets, accessories and digital books, represents the lowest holiday sales total on record for the Nook business, down from a peak of $450 million for the 2011 holidays, according to historical data from the company.

Even though the unit is dragging the company down financially, analysts say that getting out of the e-reader business would alienate many of Barnes & Noble’s most loyal customers. Barnes & Noble has been partnering with Samsung over the past year on Nook tablets. Apart from the Nook business, Barnes & Noble said today that core comparable store sales were up 1.6 percent for the holiday period, the second consecutive holiday increase by that measure.

Amazon does not release Kindle sales figures but pointed to strong sales of the Kindle Paperwhite to Prime members using free same-day delivery during the holidays. An October report by the site Author Earnings estimated that Amazon accounts for 74 percent of all U.S. e-book purchases.