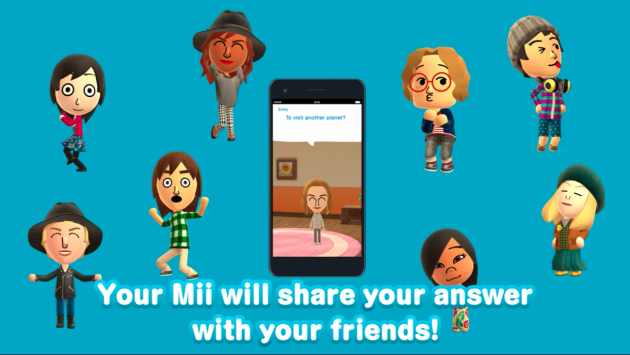 Nintendo is finally coming to the smartphone, but it’s not exactly the kind of app you’d expect from a company known for its games and consoles. Miitomo launched today in Japan, a year after the company announced it would be joining the smartphone world.

The new app is more of a social network than a game. Users can customize a Mii, the digital avatar that was introduced with the original Wii, and have it interact with friends’ Miis.

After creating a Mii, users are asked questions. Their responses are shared with friends via both text and a computerized voice reading the answers. Friends can respond with their own computerized readout. The app also allows users to customize their Mii’s clothes and create meme-ready “Miifotos” that combine virtual objects with real-world pictures.

The app is one of five smartphone apps that Nintendo plans to release this year. According to the Wall Street Journal, the other apps will be games that may be more appealing to fans (and investors). Nintendo, whose U.S. operations are headquartered in Redmond, Wash., has long been a pioneer in mobile gaming with its GameBoy lineup, but has struggled to compete with the rise of the smartphone.

The app is available in Japan today. Registration for the app opened last month, and users outside Japan can still register to get rewards and be notified when it releases in their area. The English version of the Miitomo site says it’s launching this month, but no precise date has been announced.