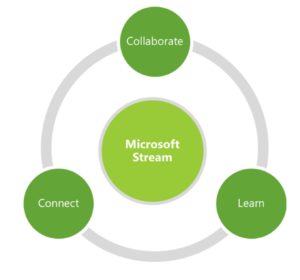 Facebook, Periscope, Vine and YouTube all make video easy to use and share for consumers, but the same ease isn’t found at work, the company said.

“Employees at all levels want to do more with video, but enterprise video management today requires a lot of IT input,” said Sudheer Sirivara, an exec with Azure Media Services, in a preview video. “Microsoft Stream democratizes creating and using videos in the workplace.” Stream is built on top of Azure Media Services.

Stream is an adjunct to Office 365 Video, a feature available within the high-end online versions of Office 365. Eventually, Stream will be merged with Office 365 Video, but it will have no immediate effect on that product, Microsoft said.

Stream allows uploading videos by dragging and dropping. Videos can be hashtagged and assigned to channels, and access to videos can be limited by role. Once uploaded, they can be viewed on any device, liked, shared and embedded. This video summarizes Stream’s features.

Future releases, not yet scheduled, might include the capability of corporation-wide broadcasts and livestreams, webinars, content-aware search and speech-to-text translation, Microsoft said.

The Stream APIs will be made public so that others can build custom applications and offer them on AppSource, the marketplace Microsoft announced earlier this month.

Stream is available at no charge to anyone with a business email address while it’s in preview mode.