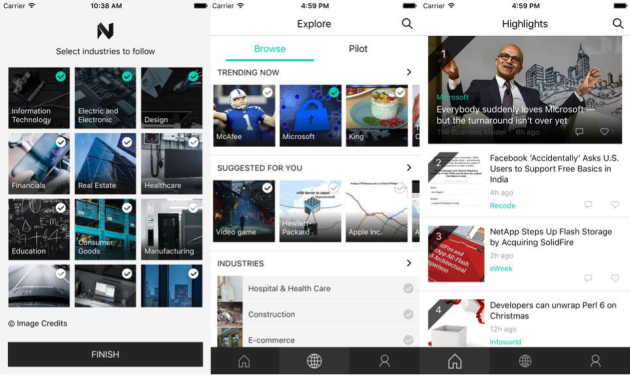 Microsoft has another app made just for iOS, and this one is competing directly with one of Apple’s newest apps.

News Pro provides “hyper-relevant news for your work,” according to its website. And while it does seem to surface stories you may be interested in, the app seems to hew closely to other socially connected news apps already available.

Microsoft says it uses Bing News and leverages your social networks to locate “the most important and relevant articles each day based off what interests you.”

To access the app, users sign in with their LinkedIn or Facebook accounts and choose some topics they’re interested in keep up with. If this sounds familiar, you may be thinking of Apple News, which lets you choose topics and media outlets to keep up with, or you may be thinking of GeekWire’s previous App of the Week, News360, which uses your social feeds to find interesting stories.

However, Microsoft is also hosting comments and likes, separate from the articles. Which makes it behave somewhat like a social network of its own, but without the friending features. The comments are loading very slowly right now, if there are any comments at all.

There’s also a Speedy mode, which acts like Instapaper or Apple’s Reader Mode in that it strips out formatting to present text in a cleaner environment. That, too, has some problems, though, pulling in newsletter signups and popup messages from some site, something that Reader Mode avoids.

And, as TechCrunch points out, the prompt to switch to the quick-loading Speedy mode looks nearly identical to another app that strips out article formatting, SmartNews.

As another release from Microsoft Garage project lab, the app is more a showcase of Microsoft’s technology than a real moneymaker for the software giant. But the app isn’t quite as polished as some other stellar apps Microsoft owns. And it didn’t come with the standard press release of other Garage apps.

It does seem to have a Twitter account, which suggests the app was supposed to go live yesterday. We’ve reached out to Microsoft for further comment.

Microsoft is releasing more and more content from the Garage. Just last week, it came out with an Android alarm that requires you to play a game before shutting it off. And it has reimagined mobile email and event planning with past apps, leveraging tech from around the company for consumer-focused releases.

News Pro is free and available in the iOS App Store now. There’s also a web version, but it’s a little more limited.