KENT, Wash. – For the first time, Amazon.com founder Jeff Bezos guided a pack of journalists around his Blue Origin rocket factory today and showed off hardware that could send people on suborbital rides to outer space as early as next year.

The billionaire tech entrepreneur also laid out a vision for space commercialization that stretches out for hundreds of years, leading to an era when millions of people would be living and working in space.

“I think space is chock full of resources,” Bezos told reporters. “This is all my view, and I’ll be dead before I’m proved wrong, so it’s a very safe prediction to make. But my view is that there will be a ‘Great Inversion.'”

We need space to make sure nothing bad happens to the Earth.

Today, huge industrial complexes on Earth build components that are sent into space, at a cost of thousands of dollars per pound. Bezos foresees an inversion in that flow of goods. “We’ll make the microprocessors in space, and then we’ll send the little tiny bits to Earth,” Bezos said.

In the long term, Blue Origin could set the stage for moving heavy industries completely off Earth, leaving our planet zoned strictly for “residential and light industrial” use.

The trends pushing in that direction include the need for space-based energy generation to fill industrial demands, the need to reduce the pollution caused by industrial activity, the falling cost of access to space and the eventual ability to use asteroids and other space resources.

“There are fundamental limits, and we’re within a few hundred years of finding those fundamental limits … Some people say, and I think it’s a reasonable point, that you need a Plan B. What happens if something bad happens to Earth?” Bezos said. “But I look at this in the opposite direction. I say we need space to make sure nothing bad happens to the Earth. Plan B is, make sure Plan A works. So that’s one. And the second thing is, it will just be an incredibly fun, inspiring part of humanity’s future to go exploring the solar system.

“Who wouldn’t want to do that? Sign me up,” Bezos said.

Showing off robots and lasers

Today’s tour was incredibly fun for Bezos – who spent about three hours showing 11 journalists around the factory, and spent another hour answering questions over lunch. His signature laugh rang out often.

“I hope you can sense that I like this,” he said.

At one point, he showed off a huge, laser-equipped robotic arm that did the welding on the huge copper nozzles for Blue Origin’s BE-4 rocket engine, still in development. “It’s all robots and lasers,” he said.

When one reporter asked how rocket engines were delivered from the Kent factory to Blue Origin’s test range in West Texas, Bezos joked that the shipment might be eligible for two-day Amazon Prime delivery. (The real answer is that the components are trucked down to Texas.)

Bezos and other Blue Origin engineers explained the workings of the 16-year-old company’s engines and spacecraft in geeky detail.

The 12-foot-tall BE-4 engine is in development for United Launch Alliance’s next-generation Vulcan rocket, which is due to have its first launch in 2019.

The engine, which will be fueled with liquefied natural gas, is also destined for use on Blue Origin’s “Very Big Brother” orbital launch vehicle. Bezos said he expects the orbital vehicle to start flying from the company’s Florida launch facility by 2020. It could be used to put commercial payloads in orbit, or send people to the International Space Station and other destinations.

Meanwhile, Blue Origin is continuing to test its reusable New Shepard suborbital rocket ship, which had its first successful spaceflight and return to Earth in November. After minimal maintenance, the New Shepard flew again in January. Bezos said there’ll soon be another uncrewed test flight at the Texas test range.

“We’re going to fly it until we lose it,” he said.

Sending humans into space in 2017?

Not to worry, though: More crew capsules and propulsion modules are already under construction at the factory.

“By the time anybody gets on, I think you should be willing to bring your mom,” Bezos said. 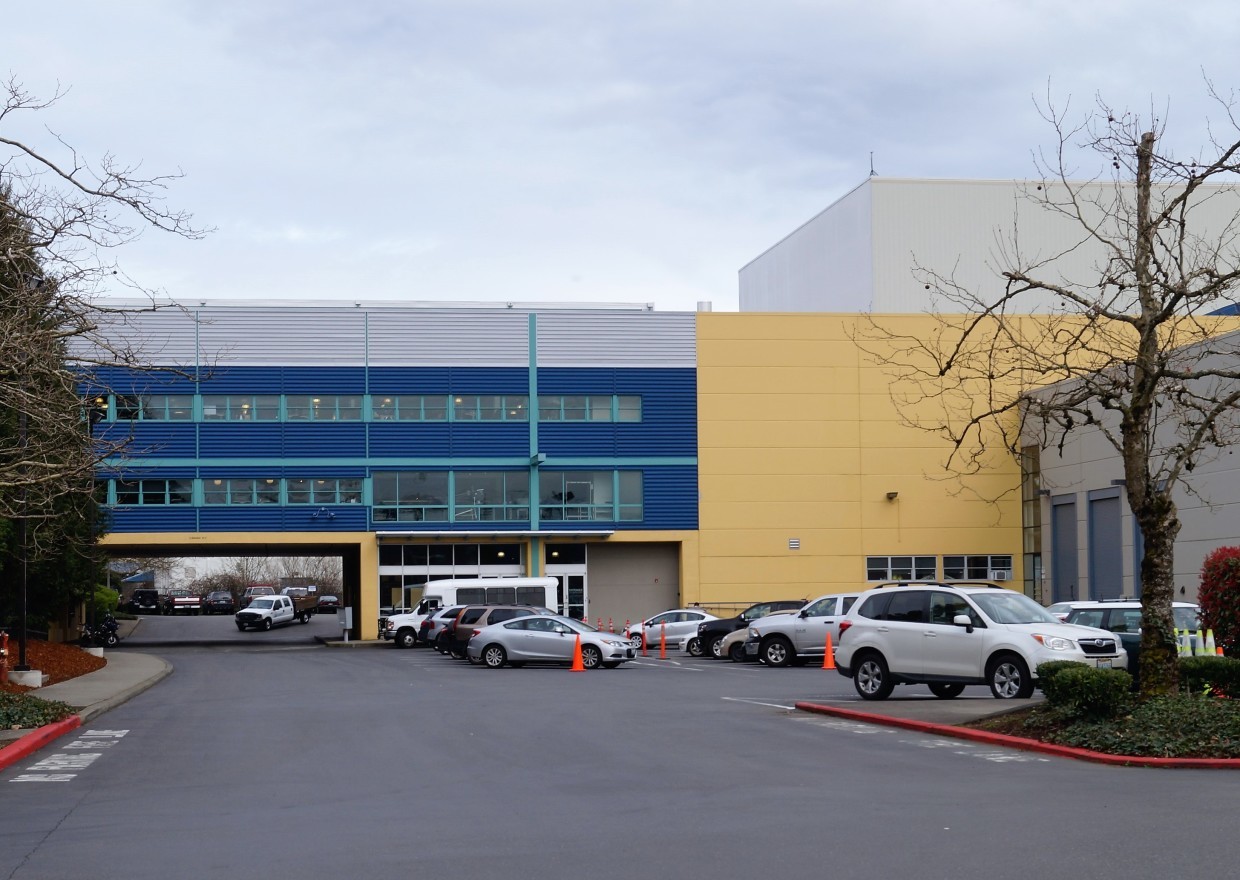 Blue Origin’s headquarters is in an industrial area of Kent. (GeekWire photo by Alan Boyle) 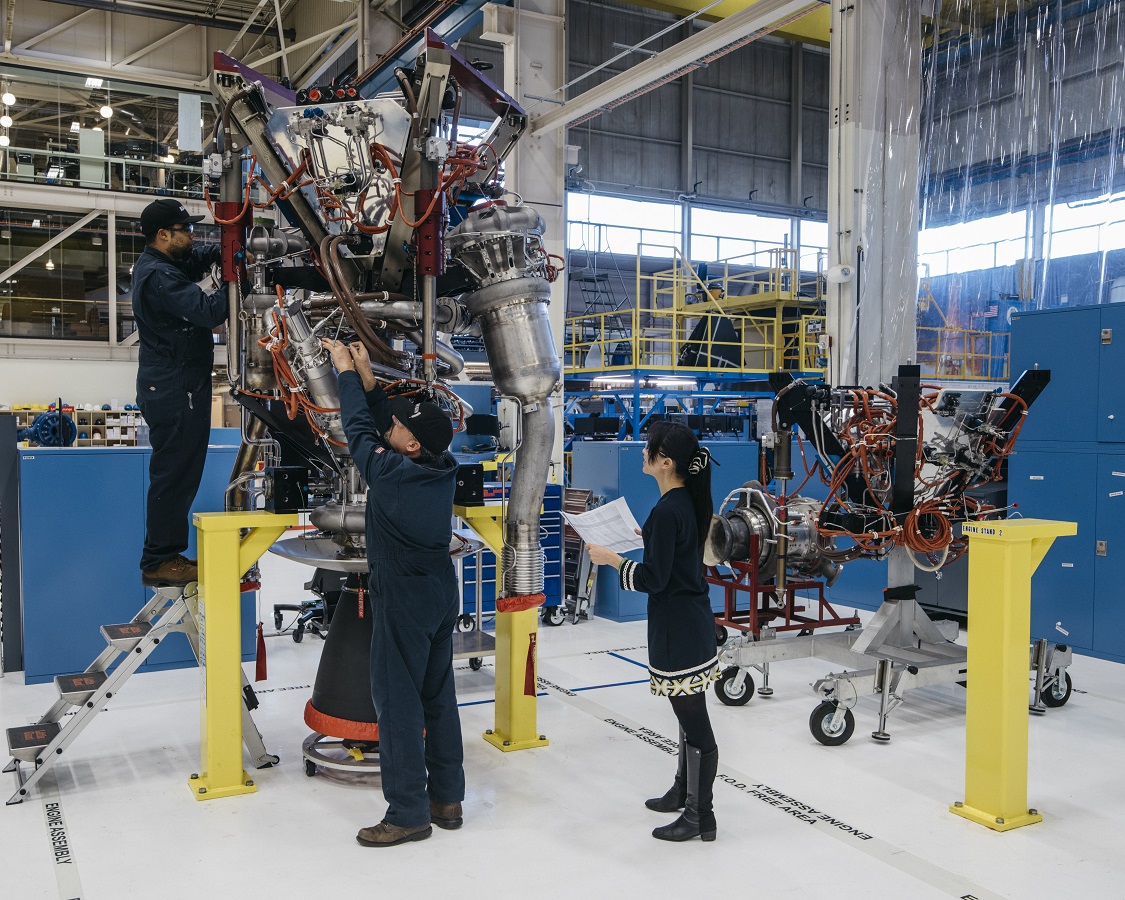 Blue Origin’s engineers work on the hydrogen-fueled BE-3 engine, which is used on the company’s New Shepard suborbital spaceship. (Credit: Blue Origin) 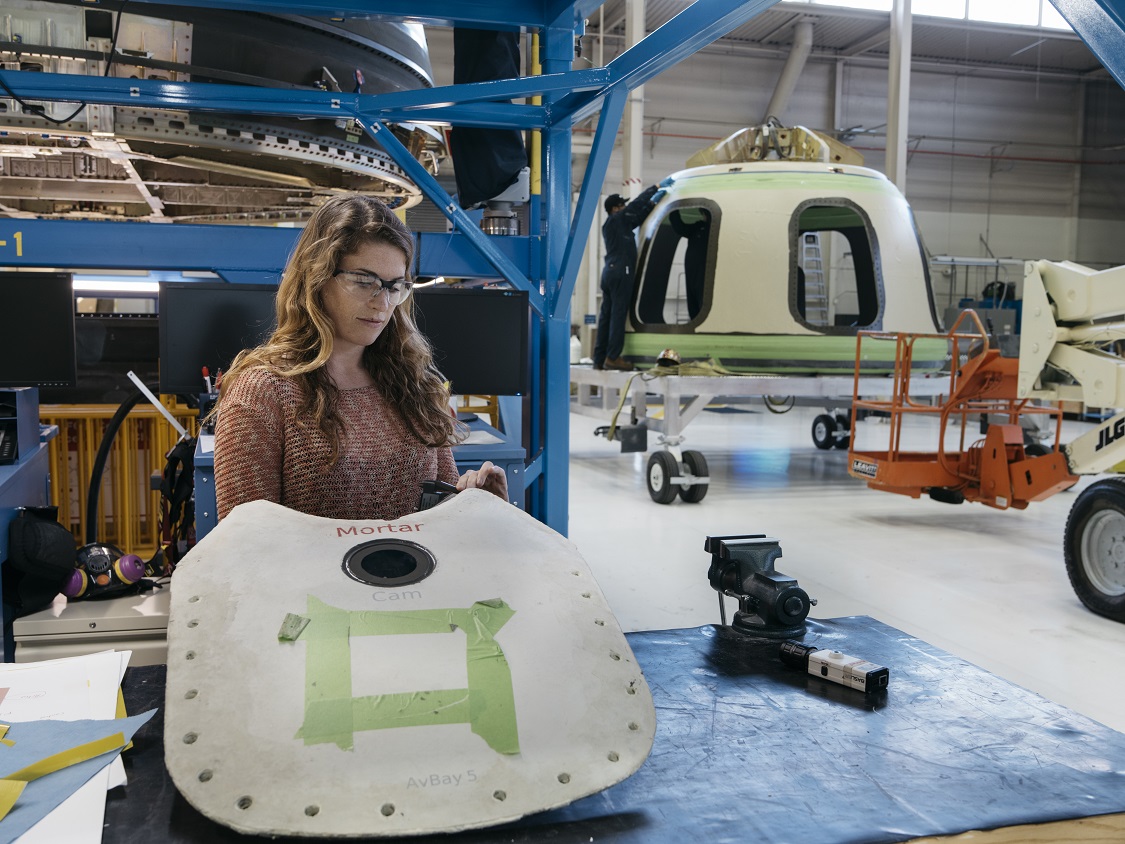 A Blue Origin engineer assembles a New Shepard parachute cover, with the crew capsule in the background. The capsule is built to accommodate huge windows. (Credit: Blue Origin) 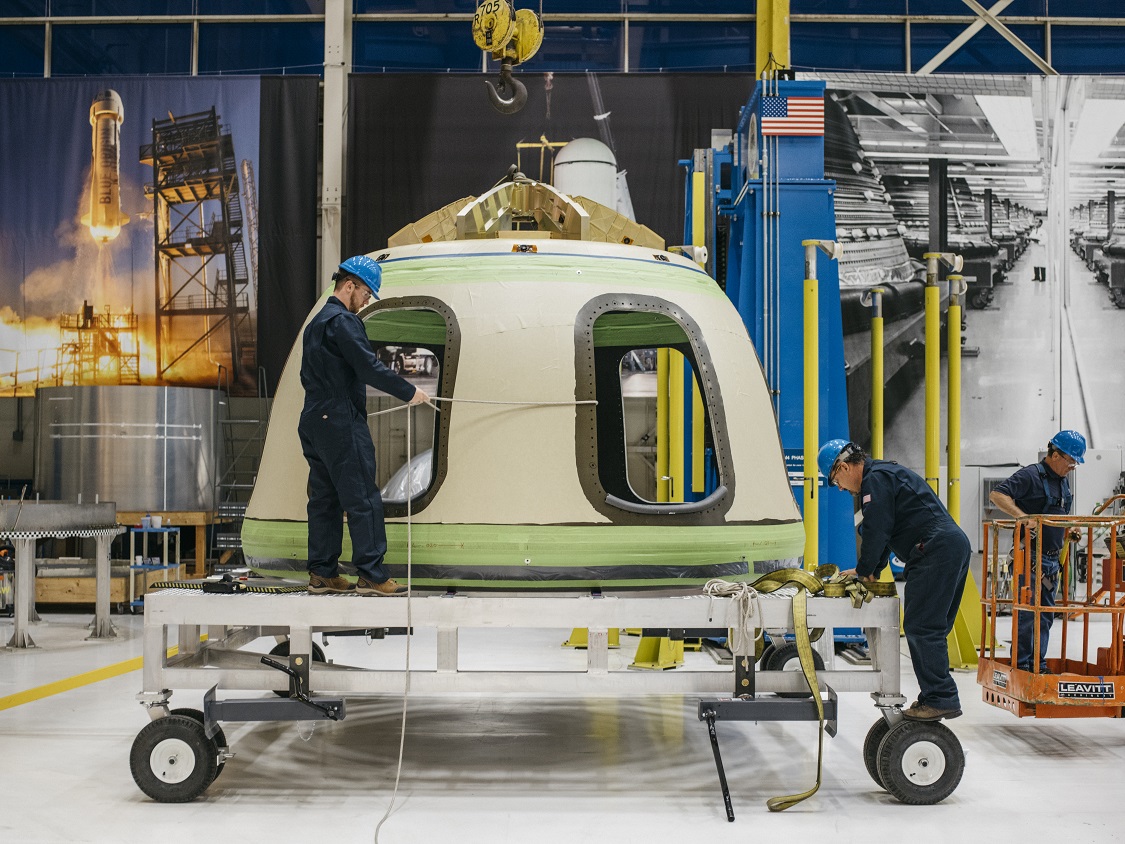 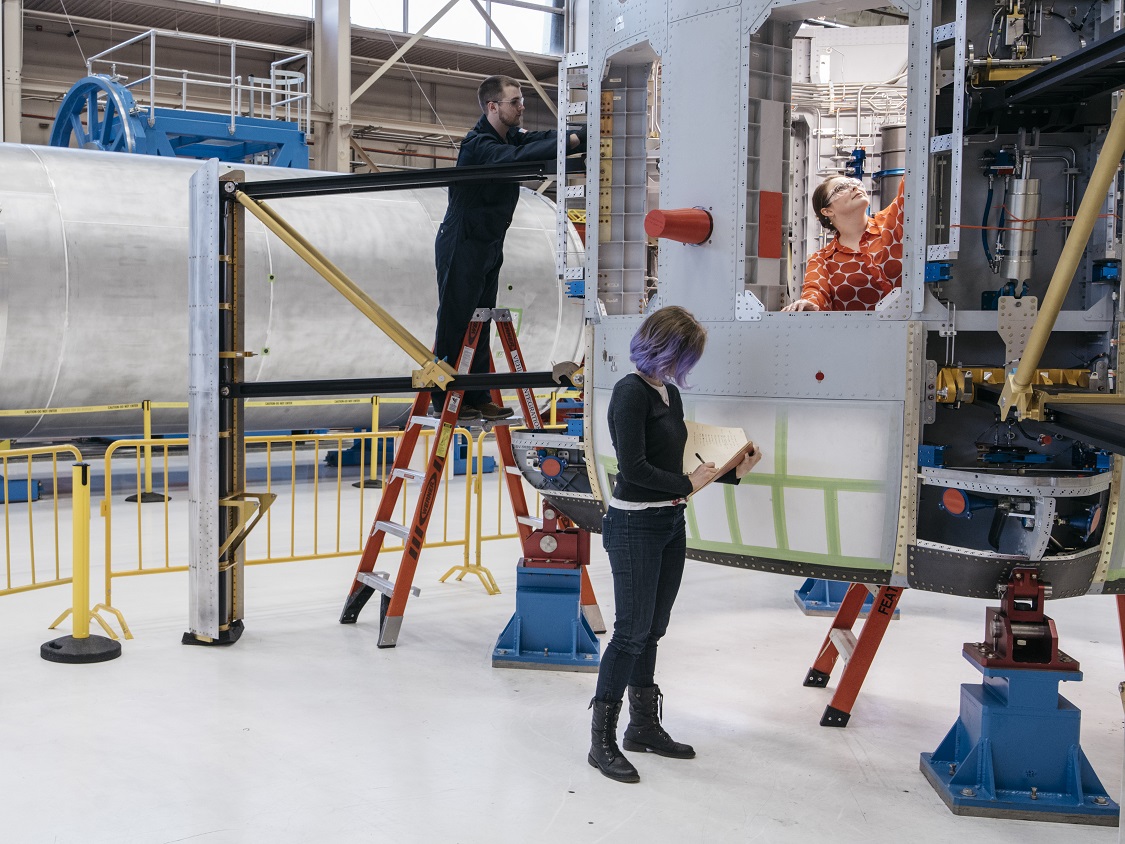 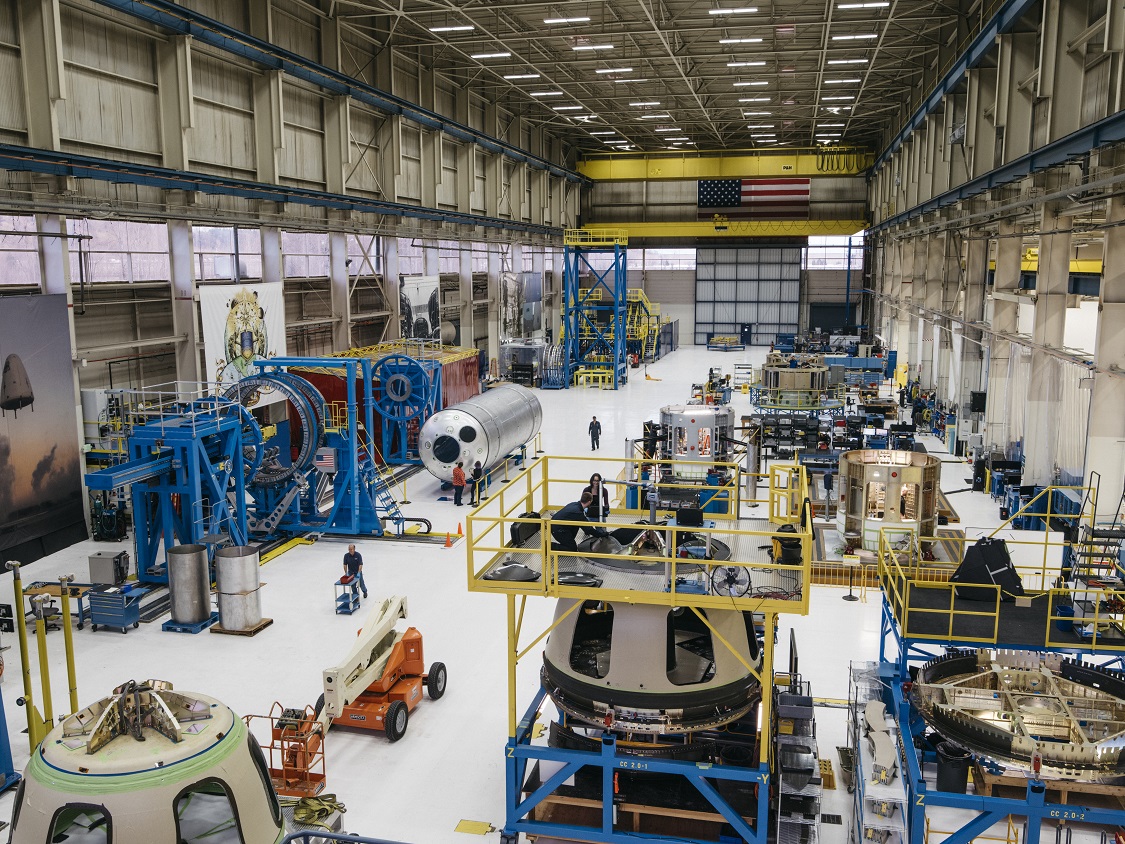 New Shepard is due to start flying unaccompanied scientific payloads later this year.

“We may put humans in this vehicle in 2017,” Bezos said. Those first humans would be test pilots – or more accurately, test passengers, since New Shepard is fully autonomous in flight. If the schedule holds, paying passengers would start taking trips in 2018.

During such trips, up to six riders at a time would recline in cushy chairs for flights going beyond 100 kilometers (62 miles) in altitude – the so-called “Karman Line” that serves as the internationally accepted boundary of outer space. They’d get a view of Earth and space through 3-foot-high windows, and be able to unstrap themselves to float in weightlessness for a few minutes.

Bezos said Blue Origin hasn’t yet decided what the cost of a trip will be, but noted that “many thousands” of people have signed up via the company’s website for more information about future flights.

Opening up to outsiders

Today’s tour was the second time journalists were allowed inside Blue Origin’s headquarters and production facility in Kent, about 17 miles south of Seattle, to work on stories for publication.

I was let in for the first visit back in 2013, to interview the company’s president, Rob Meyerson, and Brett Alexander, the director of business development and strategy. Bezos didn’t sit in on those interviews, however.

The company recently leased office space nearby to accommodate the engineers who have been hired on. And there’ll be more to come: Over the next year, Bezos said the total number of workers at facilities in Washington state, Texas and Florida is likely to pass the 1,000 mark.

The decor at Blue Origin’s headquarters hasn’t changed all that much in the past three years: Engineers still work in open offices, and gather in conference rooms named after sci-fi spaceships (including Serenity and Icarus).

A two-story-tall Jules Verne-inspired rocket sculpture still dominates the reception area, with a model of the Starship Enterprise from the “Star Trek” movies on display in a place of honor. There’s also a miniature geodesic “Agridome” from the movie “Silent Running,” on display in a hallway.

“What we want to do is empower hundreds of other companies, because there will be so many creative ideas,” Bezos said. “Somebody will want to build an Agridome. Right now, it’s completely unaffordable. It’s just not even in the realm of possibility.  But if you can lower the cost of space transportation enough, then some clever person will do that.

It is a fact that over the last 50 years, we haven’t made that much progress in space travel.

“That’s why we really want to build these fundamental enabling pieces. It is a fact that over the last 50 years, we haven’t made that much progress in space travel. It’s just a fact,” Bezos said. “There are a bunch of reasons for it, but the big one is that we don’t have the puzzle pieces in place. We don’t have all the pieces in place to allow it to explode with entrepreneurial passion.”

Putting those pieces into place is one of Bezos’ passions, and he loves to talk about it. So why did he wait so long to show off everything that’s going on in Kent? Bezos explained that it’s taken years to fill Blue Origin’s “pipeline” with substantial projects, including the New Shepard flights and the BE-4 rocket engine development effort

“The big change is that stuff is finally coming out of this big, long pipeline,” Bezos said. “It took a long time to get the pipeline filled, and now really exciting, cool stuff – it’s not just hype – is coming out the other end. It’s exciting to talk about it, and we want the world to know.”