Zillow Group CEO Spencer Rascoff started his own podcast earlier this year dubbed “Office Hours,” in part so the 41-year-old technology executive could continue a helpful tactic he started many years ago of peppering top business leaders with questions that could help shape his own career.

After six months of shows — including episodes with Box CEO Aaron Levie; OpenTable CEO Christa Quarles; former Twitter CEO Dick Costolo and others — Rascoff has learned a lot. And he shared some of those lessons Wednesday morning at a breakfast meeting with business leaders hosted by the Seattle Metropolitan Chamber of Commerce.

“This was a habit I formed long ago, of just having to grill other executives and other leaders, and learn from them,” said Rascoff. “I did this out of necessity. When I was 23 and I started Hotwire, I did not know what I was doing. When I was 30 and started Zillow, I didn’t really know what I was doing either, so I figured I’d fake it until I made it, and one way to do that was to ask a lot of questions.”

So, what has Rascoff learned over the years? Here are five of the key leadership ideals he’s picked up: 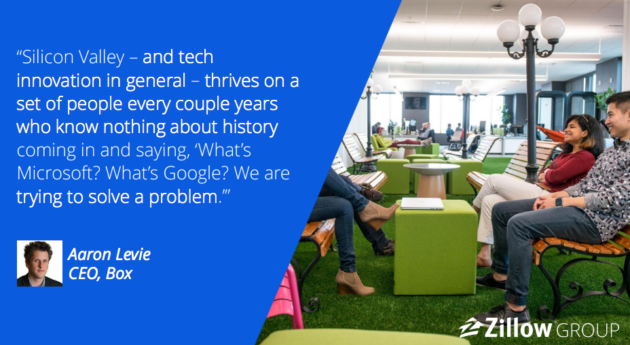 Lesson 1. Inexperience can be your biggest advantage, enabling you to see solutions that seem viable to you but not to others who know your space.

Rascoff summarized this approach at startups as the “less you know, the more dangerous you are.” He pointed out a meeting he had yesterday with a 25-year-old entrepreneur in L.A. who showed absolutely no fear of potentially competing with Zillow. When Rascoff noted that some of her services overlapped with Zillow, the young woman didn’t seem to care. “She looked at me like: ‘Look old man, I am not worried about you….’ I thought: That’s awesome. That’s amazing. That’s what entrepreneurship is.”

Lesson 2: Mature companies drive innovation by focusing on people and giving them the best infrastructure to stay competitive.

Rascoff said he learned a lot from interviewing OpenTable CEO Christa Quarles, which had been operating on a monolithic code base up until 2012 and radically overhauled its systems in order to become more agile. Companies like OpenTable, which in technology terms are dinosaurs, need to be innovative. And they need to disrupt their own product offerings, or face death. If staffers can’t ship new features and stay at the forefront of innovation, it can become “dispiriting” for employees, said Rascoff. In fact, Rascoff said that was one of the reasons why he left Expedia, whose code base at the time had ballooned to the point where it took months to implement new features. It took Expedia about two years to rewrite their systems, and after that investment it is now as “agile” as any startup. “Infrastructure, whether its your code base or your office space or your company, infrastructure creates culture, it creates agility and it creates innovation,” he said. At Zillow, Rascoff said they are trying to stay innovative by having teams spend 20 percent of their time on what he calls “velocity projects,” where certain team members update and enhancing existing projects. This is to “avoid paying the piper five or ten years later” with outdated systems. 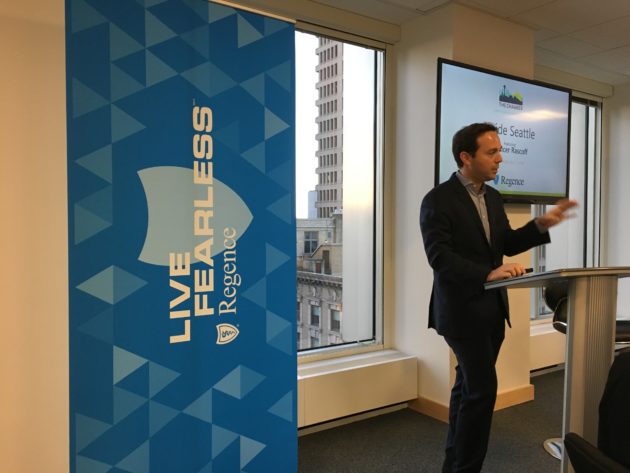 Lesson 3: Servant leadership drives productivity and innovation. Managers should focus on what they can do for their people; they shouldn’t spend time relaying orders.

When Rascoff worked at Goldman Sachs in the late 1990s, he said the CEO of the investment banking firm would send out a voice mail to staffers with marching orders of what’s ahead. It was a very top-down structure. But business communication no longer flows in that manner, and Rascoff says he’s “usually the last to know” what’s going on at Zillow. “Management used to be about having proprietary access to information, said Rascoff. Now, it is the people who operate tools like Tableau and Concur and Salesforce.com who hold the keys. In other words, information now resides in the “nodes” versus the “executive suite,” he said. Given this changing dynamic, Rascoff describes his role as an “HR executive” where his main job is to “recruit, motivate and retain the best people” and create “an environment where people can do their best work.” Rascoff added: “I pretty much spend all day long on people stuff.”

Lesson 4: If they’re just like you, hire someone else. Diverse opinions and an environment that encourages dissent give companies a competitive edge. 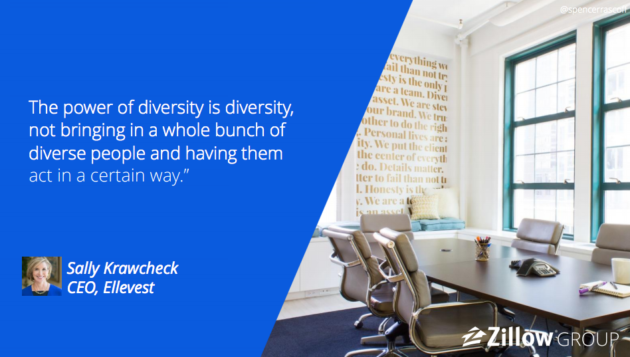 The financial crisis of 2007-2008 was really created by a lack of diversity. That’s one of the takeaways that Rascoff pulled out of an interview he did with Wall Street veteran Sallie Krawcheck, who in an interview with Rascoff discussed how the financial sector’s homogeneity and group think — with too many people who attended the same colleges and country clubs — led to the shenanigans going on in the financial sector. In his own experience, Rascoff recalls a meeting in the early days of Hotwire where one of the founders adamantly told staff to “stop agreeing with me.” Rascoff was 25 years old at the time, and the message resonated with him. “I think of that all of the time. The whole point of having people around you is to have them disagree with you,” said Rascoff, adding that Zillow has created an “argumentative culture” where dissent is rewarded, praised and expected. “I try very, very hard to create a culture where people dissent,” he said. Later, Rascoff said Zillow operates as a data-driven consensus-oriented meritocracy where they try to make decisions by following the practice of “argue-disagree-commit.”

Lesson 5: Missions help companies stay small while getting big. Employees feel connected to the larger purpose and understand the role they play in its achievement.

You gotta have a mission, and Rascoff noted the bold mission of Bill Gates and Paul Allen — a computer on every desktop and in every home — that set Microsoft on its path to success. Without a bigger mission, Rascoff said that people feel disconnected. Rascoff said its critical to get employees to believe that they are part of something that’s bigger than just themselves. “It is much more exciting the interesting to get people to get fired up about going to work if they feel they are creating this giant thing that’s bigger than them,” he said.