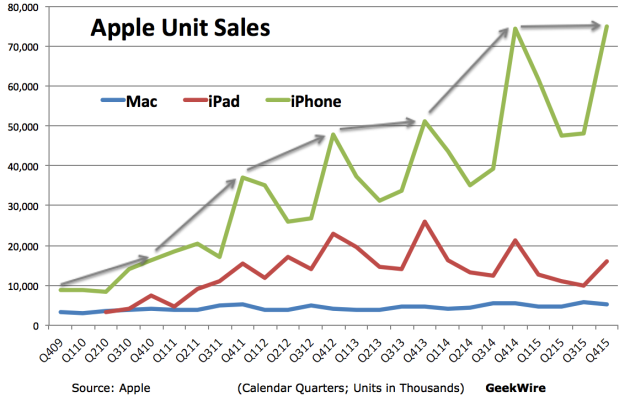 Apple sold 74.78 million iPhones in the holiday quarter, up just slightly from the 74.47 million sold by the company a year earlier. The result avoids the iPhone’s first ever year-over-year decline in unit sales, but raises questions about the future growth potential for the iconic smartphone.

The company reported the number as part of its quarterly earnings this afternoon. Apple’s overall revenue of $75.9 billion was less than the consensus of $76.6 billion among analysts polled in advance by Thomson Financial. Earnings came in at $3.28 per diluted share, beating analysts’ estimates of $3.23 per share.

Still, the company’s revenue set a record, as did its profit of $18.4 billion. It’s being called the most profitable quarter in American history.

Apple CEO Tim Cook sought to put the results in context on the company’s earnings conference call. “This is a huge accomplishment for our company, especially given the turbulent world around us,” Cook said, citing signs of an economic downturn.

He pointed out that the nearly 74.8 million iPhones sold was still an all-time high. He called it an “incredible number” that speaks to the “immense popularity of the iPhone.” Apple saw more people switch to iPhone from Android than at any other point in its history, he said. Overall, the company said the overall number of active devices has reached 1 billion, including Apple Watch and Apple TV.

Cook noted that 2/3 of Apple’s revenue is now generated outside the U.S., making foreign currency fluctuations a key factor in the company’s results.