For 45 years, Powell’s Books has defined what success means in the bookstore business.

Now, the highly-regarded Portland bookstore is getting some serious competition in its hometown from a company that has struck terror in the hearts of retailers everywhere. 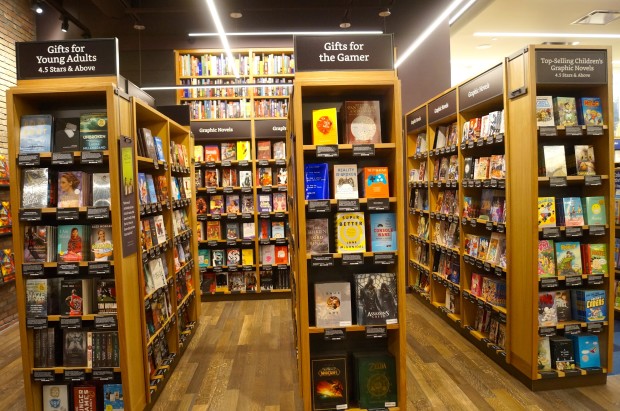 Amazon.com is planning to open a new bookstore in the Washington Square mall in Tigard, Oregon, just outside of Portland. The new store is slated to open this fall near the Nordstrom store in the mall, according to a report in The Oregonian.

It will mark Amazon.com’s third brick-and-mortar bookstore, following the grand opening of a store in Seattle’s University Village mall last fall. A second store is slated to open in San Diego this summer.

We’ve reached out to Amazon.com for comment, and we’ll update this post if we hear back. We’ve also asked Powell’s, which employs more than 500 people across five bookstores in the Portland area, for comment.

It will be interesting to see how Portlanders react to Amazon’s arrival, given that many in the Rose City hold a grudge against anything associated with their Seattle neighbors to the north. (Unsure of this bitter rivalry? Check out a Seattle Sounders-Portland Timbers soccer match some time).

Portlanders also tend to walk to the beat of their own drummer, showing a distaste for corporate giants, which Amazon.com has certainly become in recent years. 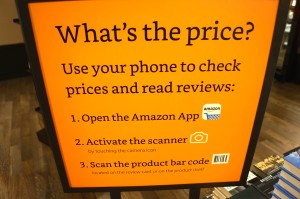 In an interview with GeekWire last fall, Amazon Books’ head Jennifer Cast hinted that more stores might be on the way.

“We hope that if this goes well, if customers love it, we’d love to do it in other places,” Cast said.

The Amazon book store takes a slightly different approach to retail. All book titles face outward, making it easy for customers to browse titles. Also, none of the books have price tags. Instead, customers wave the bar code on the book under a scanner in order to determine the price, which matches prices found on Amazon.com.

The store in Seattle, which spans 7,400 square feet and includes about 5,000 books, also showcases a healthy slate of Amazon devices, including the popular Kindle e-readers.

In recent years, Amazon.com has increasingly unlocked creative ways to get closer to its customers. Physical retail stores, long the advantage of traditional brick and mortar retailers, is one way to do that.

When asked why he robbed banks, Willy Sutton reportedly replied “because that’s where the money is.” I am certain that Amazon has the data to show that opening a store in the Portland area will be financially beneficial to the company.  They know this town is filled with book lovers and book buyers.

I think the most interesting aspect of Amazon’s move to open physical retail bookstores is the acknowledgment by the largest online retailer that something special occurs in a physical bookstore that is not replicable online. The serendipity of walking down an aisle, the sense of community that comes from browsing with other book lovers, and the joy of being handed a recommended book by a human being can’t be replaced by a search engine.

Local, independent bookstores have been saying this for the past 15 years – it’s great to see that Amazon agrees.

An Amazon spokesperson provided the following statement about the new bookstore.

We are excited to be bringing Amazon Books to Washington Square this fall, and we are currently hiring store managers and associates. Stay tuned for additional details down the road.