Amazon and Brita are partnering on the first smart water pitcher that monitors its own filter use and then uses Wi-Fi to automatically order replacement filters via the Amazon Dash Replenishment service.

The Brita Infinity Pitcher, announced today, joins a wave of devices and home appliances that now use Amazon Dash Replenishment to trigger an automatic re-order of essential supplies and components that will be delivered directly to consumers’ homes.

The new pitcher knows when to get a new filter because it has a built-in counter that monitors how much water already has passed through its existing filter. After a consumer has registered the pitcher on Brita.com/infinity, connected the pitcher to their home Wi-Fi network, and signed up for Amazon Dash Replenishment via their personal Amazon account, the pitcher is ready to do its own automatic re-orders.

Using the Wi-Fi connection, the pitcher purchases a new filter through Amazon Dash Replenishment and a new filter is mailed to a customer in time to change the old one out. The automatic re-order prevents users from drinking water through a dirty filter by providing a fresh replacement and doubles as reminder to make the swap, since the new filter arrives on customers’ doorsteps as the old filter is nearing the end of its lifetime — about 40 gallons of water filtered.

A new wave of automatic e-commerce seems to have begun just within this last year. The trend kicked off with Amazon’s introduction of the Dash button — a physical device that users could push to trigger a re-order of supplies. Now, smart devices like the Brita Infinity Pitcher that self-monitor and make their own requests for replacements have joined the fray so that re-ordering can happen automatically without requiring the consumer to do a thing beyond initial setup. 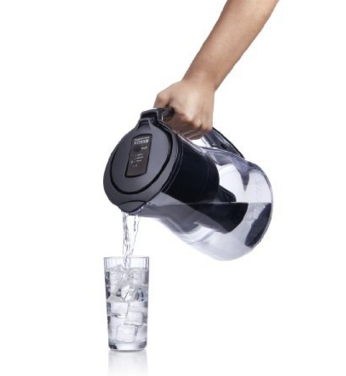 At CES 2016, Whirlpool was the first appliance manufacturer to announce that it had partnered with the e-commerce giant to create smart devices, releasing smart dishwashers, washers, and dryers enabled with Amazon Dash Replenishment.  After that, Amazon opened up its Dash Replenishment Service to device manufacturers. The first device company to partner with Amazon was Brother Printers, who created a smart printer that automatically orders its own ink and toner replacements.

Other consumer brands who have plans to incorporate Amazon’s Dash Replenishment Service include Samsung, Purell, Sealed Air, Thync, Obe, CleverPet, Oster, Petnet, and August. Samsung will be enabling its printers with Amazon Dash Replacement. Purell will have its soap and hand sanitizer dispensers order refills when supplies are running low. And four companies — Obe, CleverPet, Oster, and Petnet — will all create smart dog food bowls that order new food when Spot nears the bottom of his bag.