Zuilly shares are collapsing after the Seattle retailer said it was lowering its revenue outlook for the year.

But that wasn’t the only disappointing news.

In the first quarter, Zulily’s sales totaled $306.6 million, which was at the low-end of the company’s outlook, and fell short of analyst expectations, which were projecting revenue of $313 million. 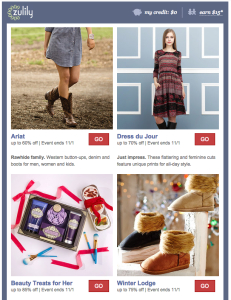 Following the report, the retailer’s shares sank nearly 18 percent in after-hours trading, or $2.08 a share, to trade at $9.74 apiece. The stock is off nearly 50 percent in the past year.

However, the company did report better-than-expected earnings of 1 cent. Analysts had been expecting the company to lose 3 cents a share.

As part of the report, Zulily also announced it has appointed Brian Swartz as SVP and CFO, effective June 1. For the past six years, Swartz served as SVP and CFO of Apollo Education Group.

In the fourth quarter, Zulily announced that the previous CFO Marc Stolzman would step down after reporting 2014 financial results that disappointed Wall Street.

Zulily sells clothes and other home items at big discounts, but has struggled to meet customer expectations, especially when it comes to shipping products to customers in a timely manner.

In a call with analysts this afternoon, CEO Darrell Cavens said it continues to make progress on that front. In the first quarter, it took 11.9 days to ship orders, down from 12.8 days for all of 2014 and 13.7 days in the fourth quarter.

Other changes in the works include temporarily spending less money on marketing while they change their strategy.

In 2014, Zulily said they attracted a lot of customers upfront, who didn’t necessarily convert to a long-term relationships. Most of the marketing was focused on advertising products that were immediately available on the website. In doing so, it led to high conversions, but those people “don’t turn into long-term customers,” the company said.

Zulily is also reducing the number of items it is selling every day to “100 events,” at the request of long-term customers, who found it too time consuming to wade through the variety of items for sale.

Over the past couple of years, the company had expanded rapidly from mainly selling children’s items to other categories, such as home accessories and women and men’s clothing.

“We have to keep focusing on the customer first,” Cavens said, adding that some of the changes they are making may limit revenue growth, but that the new approach will pave the way “for a stronger business and greater opportunity in the years to come.”