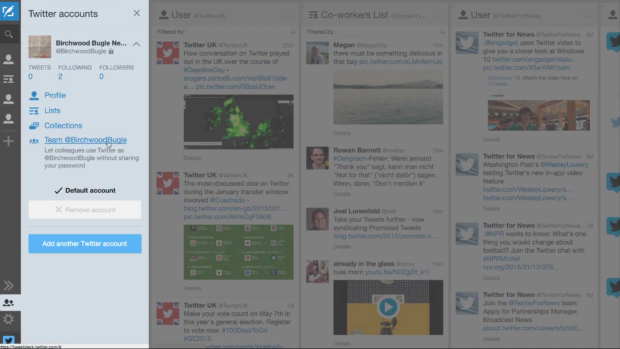 Twitter is trying to make it easier for people to share Twitter accounts with a new feature for TweetDeck. Called TweetDeck Teams, it allows a set of administrators to create a team of people who all have the ability to tweet from a single account without actually giving them its password.

The change will make it easier for larger companies to manage access to group Twitter accounts without giving all of its employees the keys to the castle. If someone leaves the company, all an administrator has to do is remove them from the TweetDeck Team, and they won’t be able to post from the company account anymore.

Similarly, the change might help alleviate the rash of high-profile incidents of organizations getting their accounts hijacked. If an attacker manages to get the password for the account of a contributor to a TweetDeck Team, the administrator can just block that contributor, and stop the attack.