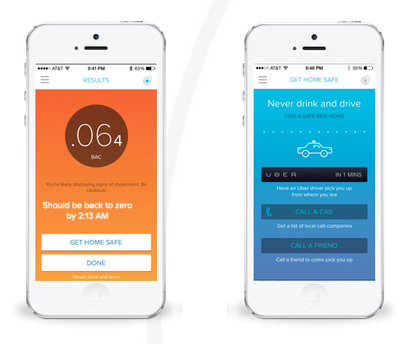 You can now use a breathalyzer to call for an Uber.

Breathometer, the startup that sells a smartphone-connected breathalyzer, today announced that it is tapping into Uber’s API to allow users to easily hail an Uber driver if their blood alcohol content is close to or above the legal limit.

Those that are legally too drunk to drive will now have an option to call for an Uber, a cab, or a friend directly within the Breathometer app. Breathometer has been testing the Uber integration for the past nine weeks, and when presented with those three “Get Home Safe” options, more than half of users chose Uber.

Breathometer also offers a “Stay Nearby” feature that gives people a way to “find some food,” or “grab a room,” or do “activity,” when they are too drunk to drive. Charles Michael Yim, the company’s CEO, said that integrating Uber was one of the most frequently-requested features from users.

“We have a growing customer base located in rural, suburban and urban environments,” he said in a blog post. “Having to call a friend or schedule a cab isn’t always an easy choice. Access to a dependable and on-demand ride solution directly from the app for anyone that has been consuming alcohol is critical.”

Breathometer, which reeled in $1 million from each investor on the ABC show Shark Tank, is one of many other apps taking advantage of Uber’s API, which the on-demand transportation company made available this past August. The API can provide financial benefits for developers, as Uber allows them to sign up as an affiliate and earn money whenever one of their users takes a ride, or signs up as a new Uber user.