Students and faculty at Seattle University got a rare glimpse inside the world of Amazon.com on Tuesday night as Jeff Wilke — the senior vice president of consumer business — took to the stage as part of the Albers Executive Speaker Series. 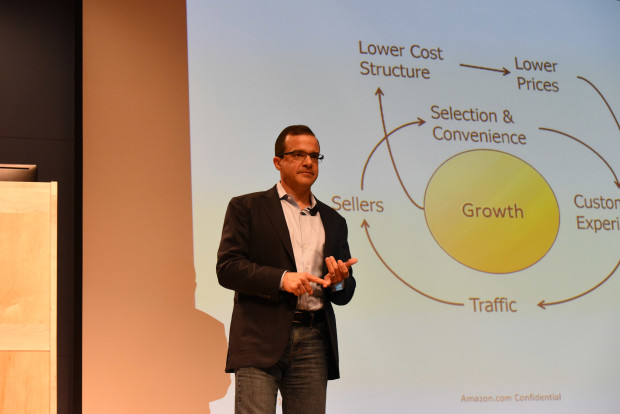 In an entertaining and informative hour-long talk, Wilke — a chemical engineer who moved his young family to Seattle in 1999 to join Amazon — laid out the core leadership principles that make up the often misunderstood tech and online retailing juggernaut.

The fact that Wilke was on stage talking at all was peculiar enough, given the low-profile nature of the executive management team at Amazon.

Wilke even admitted that the idea of presenting to a group with PowerPoint was “pretty rare,” given that internal meetings at Amazon start with everyone in the room spending up to 45 minutes reading in silence as they digest detailed documents known as “narratives.”

“We write our thoughts down because we expect leaders to dive deep,” said Wilke. “We like this because narratives yield a very clear understanding of the thoughts of the author, and also because all of the ideas that are normally preserved in the PowerPoint notes that the speaker has are actually preserved in the narrative for all who participate.” (Related: These 20 words show what’s on the mind of this top Amazon executive)

We write our thoughts down because we expect leaders to dive deep.

Wilke then guided the audience of about 250 through the leadership principles that the company established years ago, reading verbatim from each core principle.

Many of the principles are extremely familiar to Amazon.com’s more than 150,000 employees, used almost religiously in staff reviews, shareholder letters and other internal and external communications.

But some of the principles — a few of which Wilke described as “peculiar” but incredibly important — are not as well known to outsiders. For example, one key principle — being “vocally self critical” — is written this way:

Leaders do not believe their or their team’s body odor smells of perfume. Leaders come forward with problems or information, even when doing so is awkward or embarrassing. Leaders benchmark themselves and their teams against the best.

Together, the 14 principles (see all of them below) present an interesting view into Amazon, and hearing Wilke speak about each one in detail provided deeper insight into the $200 billion company and what makes it tick. 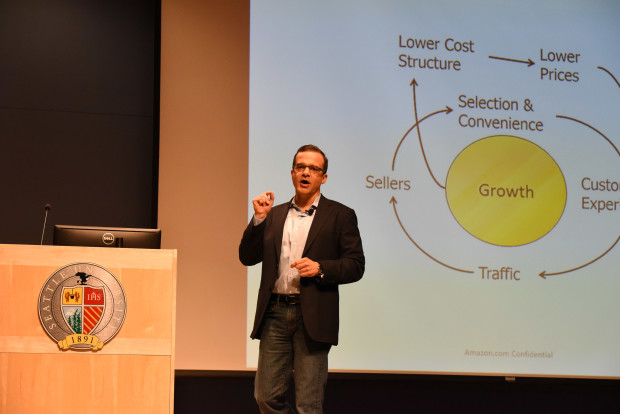 For example, while many have heard Amazon founder Jeff Bezos hammer home the idea of customer obsession, few may know that the company’s new product concepts start with a press release.

We try to write the headline and the press release that you’d want to use at the launch of a new product. It is our way to visualize the things that we want to build.

“We try to write the headline and the press release that you’d want to use at the launch of a new product,” said Wilke, showing a slide of the initial press releases that managers conceived for products such as AmazonSmile and AmazonStudent. “It is our way to visualize the things that we want to build.”

One other key component of Wilke’s talk — embodied in a few of the principles — centered around how Amazon keeps the innovation engine humming even as it gets bigger. The company attempts to empower employees to make decisions, and to do so quickly, finding a way to say “yes” rather than “no.”

Wilke said that they are terrified by the idea of moving slow, bogged down by multiple layers of management which paralyze employees into a state of inaction.

“We think about one-way doors, and two-way doors. A one-way door is a place with a decision if you walk through, and if you don’t like what you see on the other side, you can’t get back. You can’t get back to the initial state. A two-way door, you can walk through and can see what you find, and if you don’t like it, you can walk right back through the door and return to the state that you had before. We think those two-way door decisions are reversible, and we want to encourage employees to make them. Why would we need anything more than the lightest weight approval process for those two-way doors?”

Not everyone agrees at Amazon.com, and the company attempts to encourage staffers to question plans with backbone and conviction. Wilke himself encountered one of these situations when Amazon was looking to introduce the Kindle, a project that he believed would prove too costly and took the company away from its roots in software into the more unpredictable world of hardware.

Wilke protested the original plan for the Kindle. He was asked to “disagree and commit” to the Kindle, jumping on board with the plan. “Though everything that I was worried about happened, Jeff (Bezos) pushed the company to power through early setbacks, and we consequently built a great digital business,” he said.

Here are the 14 principles as described by Wilke and on Amazon’s Web site:

Customer Obsession
Leaders start with the customer and work backwards. They work vigorously to earn and keep customer trust. Although leaders pay attention to competitors, they obsess over customers.

Ownership
Leaders are owners. They think long term and don’t sacrifice long-term value for short-term results. They act on behalf of the entire company, beyond just their own team. They never say “that’s not my job.”

Invent and Simplify
Leaders expect and require innovation and invention from their teams and always find ways to simplify. They are externally aware, look for new ideas from everywhere, and are not limited by “not invented here.” As we do new things, we accept that we may be misunderstood for long periods of time.

Are Right, A Lot
Leaders are right a lot. They have strong business judgment and good instincts.

Hire and Develop the Best
Leaders raise the performance bar with every hire and promotion. They recognize exceptional talent, and willingly move them throughout the organization. Leaders develop leaders and take seriously their role in coaching others.

Insist on the Highest Standards
Leaders have relentlessly high standards – many people may think these standards are unreasonably high. Leaders are continually raising the bar and driving their teams to deliver high quality products, services and processes. Leaders ensure that defects do not get sent down the line and that problems are fixed so they stay fixed.

Think Big
Thinking small is a self-fulfilling prophecy. Leaders create and communicate a bold direction that inspires results. They think differently and look around corners for ways to serve customers.

Bias for Action
Speed matters in business. Many decisions and actions are reversible and do not need extensive study. We value calculated risk taking.

Frugality
We try not to spend money on things that don’t matter to customers. Frugality breeds resourcefulness, self-sufficiency, and invention. There are no extra points for headcount, budget size, or fixed expense.

Vocally Self Critical
Leaders do not believe their or their team’s body odor smells of perfume. Leaders come forward with problems or information, even when doing so is awkward or embarrassing. Leaders benchmark themselves and their teams against the best.

Earn Trust of Others
Leaders are sincerely open-minded, genuinely listen, and are willing to examine their strongest convictions with humility.

Dive Deep
Leaders operate at all levels, stay connected to the details, and audit frequently. No task is beneath them.

Have Backbone; Disagree and Commit
Leaders are obligated to respectfully challenge decisions when they disagree, even when doing so is uncomfortable or exhausting. Leaders have conviction and are tenacious. They do not compromise for the sake of social cohesion. Once a decision is determined, they commit wholly.

Deliver Results
Leaders focus on the key inputs for their business and deliver them with the right quality and in a timely fashion. Despite setbacks, they rise to the occasion and never settle.