There’s certainly no question that the technology industry is transforming Seattle. (Just take a look at the skyline in South Lake Union or a stroll through Pioneer Square if you need a reminder).

But what sort of impact occurs when a new engineer, programmer or developer is hired at one of the region’s fast-growing technology companies?

And when one of those roles is added to a company, it creates another 1.7 jobs within their own company and another 2.7 jobs across the wider economy for a multiplier effect of 7 jobs. In total, the study found that there were 238,900 workers in the Information & Communication Technology (ICT) workers in the state, including 162,900 who were working directly for technology-oriented companies.

The State’s continued economic success is tied to developing and attracting the talent needed to serve the opportunities created by the ICT sector.

Even so, many of the workers for those types of high-wage technology jobs are not coming from Washington state, with the study finding that the state is the highest importer of information and communication worker talent in the nation on a per capita basis.

“The State’s continued economic success is tied to developing and attracting the talent needed to serve the opportunities created by the ICT sector,” the report says. “State investments in ICT training and company support are needed to keep pace with the opportunities.” 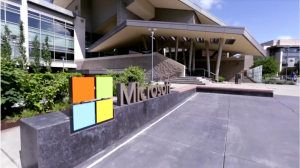 The study also found that there were 8,610 Information and Communication companies in Washington state in 2013, generating $36.9 billion in annual revenue in Washington state revenue. (Editor’s note: This phrase has been clarified to indicate just Washington state based revenue).  Of that tally, $16.4 billion is exported, making Washington state the third biggest exporting state behind California and Texas. (The report may have missed out on some of the revenue driven through the tech giants in the state, since Amazon.com had $88.99 billion in revenue last year, while Microsoft posted $86.3 billion).

The top 10 technology companies in the state boasted a total market value of about $600 billion.

“While the industry has and will continue to invest in its own growth, the State would benefit immensely by serving as an investment partner with the industry to fully capture the potential for the region,” the report concludes.