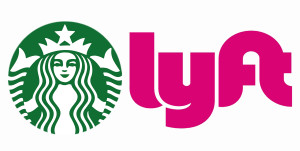 Starbucks just announced a broad partnership with ride-sharing company Lyft, including a plan to reward Lyft drivers and customers in the U.S. with My Starbucks Rewards “stars” that will count toward food and beverages at Starbucks stores.

The initiative, to be rolled out starting later this year, is the latest extension of the My Starbucks Rewards digital loyalty program to outside companies, following earlier deals announced by Starbucks with Spotify and the New York Times.

The deal with the Seattle-based coffee giant also promises to boost Lyft in its competition with arch-rival Uber.

“We’ve spent a lot of time with (Lyft) over the last few months and have been so deeply impressed with their business model, their values and approach of building a business the right way,” Starbucks CEO Howard Schultz said on a conference call with reporters. He added later, in response to a reporter’s question, “We have respect for Uber. In this case, we believe that Lyft is the company for us.”

Lyft drivers will also be able to receive Starbucks “stars” for achieving certain milestones, and they will have the option to become gold status members in My Starbucks Rewards. In addition, executives said they’re exploring the possibility of Lyft providing transportation to Starbucks employees as part of their partnership.

John Zimmer, co-founder and president of Lyft, said the partnership brings together two daily rituals: a cup of coffee, and a commute to work. “With that overlap, there’s an incredible amount of opportunity to help each other, to continue that ritual, and to add value for both our drivers and passengers,” Zimmer said.

Under the partnership, Lyft will purchase Starbucks “stars” that the ride-sharing company will be able to give to its customers and drivers. Details on how many stars will be handed out, and under what circumstances, are still being worked out.

“In Lyft’s case, they’re going to be in the best position to understand how to reward both their drivers and their customers,” said Adam Brotman, the Starbucks chief digital officer. “We’re going to work with them to come up with what the offers would be, and just make sure it’s seamless however we offer it.”

Schultz cited the My Starbucks Rewards program as a key companion to the company’s existing mobile payments network, and its mobile ordering and payments functionality, which is in the midst of a national rollout. Starbucks will also be offering delivery starting later this year, working in partnership with Postmates for a pilot of the program in Seattle.

Answering a question from GeekWire on the call, Schultz left the door open to working with Lyft for delivery, as well. “I would say that, certainly, given Lyft’s core business, the opportunity to integrate delivery with Lyft certainly exists. That’s not part of today’s announcement, but I think you can probably — well, I should just leave it at that.”

Drivers, Riders to Be Rewarded, Incentivized with Stars

SEATTLE, July 22, 2015 – Starbucks Coffee Company (Nasdaq: SBUX) and Lyft, one of the nation’s leading transportation network companies, today announced a new, multi-year deal that will increase value for current customers, attract new customers, reward Lyft drivers and explore a transportation benefit for partners (Starbucks employees). All Lyft drivers will have the option of becoming My Starbucks Rewards® (MSR) loyalty program gold status members, and both Lyft drivers and riders will have the opportunity to earn Starbucks loyalty stars redeemable for food and beverages at participating Starbucks stores.  The partnership builds on what is fast becoming the retail sector’s most robust digital loyalty ecosystem enabling both Starbucks and Lyft to engage with partners (employees), drivers and both companies’ customers in new and meaningful ways.

“With Lyft’s presence in 65 cities across the U.S., where we also have Starbucks serving the same communities, we knew this relationship would benefit our partners, Lyft’s drivers as well as our mutual customers that are already coming to Starbucks and using Lyft services,” said Adam Brotman, chief digital officer, Starbucks. “This is a great win win.  Our digital loyalty ecosystem will strengthen Lyft’s ability to attract and retain customers in a highly profitable way, while at the same time accelerating the incrementality of redemption of rewards.”

Additionally, Lyft drivers will be able to receive Starbucks eGifts from customers using the Lyft app and looking to thank their driver in a more personal way.

“There are two things most of us do every morning: get a cup of coffee and commute to work.  Together with Starbucks, we can make both a friendlier, more enjoyable experience,” said John Zimmer, co-founder and president of Lyft.  “Lyft and Starbucks share a lot of the same customers and importantly we share a commitment to doing right by our customers and our people. In the days, months and years ahead, we will launch exciting programs for loyal community members, and new products that will change the way we move around our cities.”

Furthering its vision to provide the most robust digital ecosystem of any retailer in the world, Starbucks continues to find new ways and platforms to engage and stay connected with its customers.  Lyft is one of several new partnerships enabling My Starbucks Rewards® loyalty members the chance to earn Stars through both Starbucks and non-Starbucks purchases.  In addition to the new partnership with Lyft, Starbucks recently announced deals with Spotify and The New York Times, introducing this new opportunity for Starbucks loyalty program members to earn stars through purchases made with other companies. Customers will then have the ability to redeem those earned stars for food and beverages at participating Starbucks® stores.