Smartsheet co-founder Brent Frei described his company’s rocky path to success today at the 9Mile Labs Demo Day event, retelling how the Bellevue maker of work collaboration tools had do reinvent its alternative to the spreadsheet in the early days of the company.

It was not an easy decision — but Frei described the challenge of how Smartsheet changed directions on the fly. 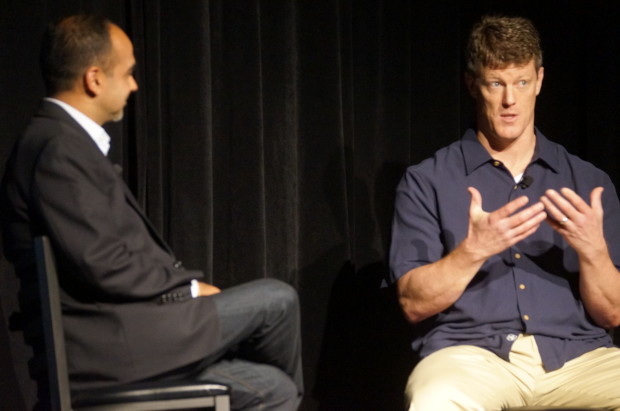 “We recognized the pace and the conversion rate at which people were trying the product and those that paid or stuck around was too small,” said Frei. “And we were going to be the 435th company that wasn’t a winner.”

Smartsheet initially incorporated too much of its historical enterprise software DNA into the premium product, making it too hard for customers to figure out what to do.

The decision in front of Smartsheet was clear: Shut down or rebuild.

Luckily, Frei said they had supportive investors in Madrona Venture Group, which allowed them to make the pivot and reinvent the company. Even so, he called the decision a big “roll of the dice.”

“I’ve said multiple times: UX and UI means a ton,” said Frei. “The subtle changes we made to the user experience to get it there required a total rewrite from the bottom up. We were fortunate that we took a bunch of money from Madrona six months before we did this rewrite.”

While one staffer left during the transition, Frei said that most at the company realized that they had to make the shift. Watching early customers interact with the product really put the problem in perspective, he said.

“Holy, mackerel was that humiliating as they described what they expected to happen” he said. “It was entirely counterintuitive. They didn’t get any of the architectural design.”

The fundamentals behind the business were strong, but the design was just off.

So much came down to the design. Could we get the product to behave the way we wanted.

“We knew that there was an answer if we could just get the design right. So much came down to the design. Could we get the product to behave the way we wanted,” he said. “I am very envious of companies like Uber and Apple and others who have figured out that user experience that is just so darned awesome that you don’t have to learn anything, you don’t have to learn anything, it just does it all for you. And that is a real art.”

Once they nailed the design, Frei said things started to fall into place with big customers like Google, Groupon, Cisco and GSA. Employees at organizations started to embrace Smartsheet, and the product spread deeper into those enterprises.

“We almost, by definition, have to have a groundswell of use and interest before we have an enterprise discussion,” he said. “And that, in fact, is what has happened.” Ordinary employees at the big companies started embracing the product for a variety of tasks, opening the doors for deeper customer interactions.

Founded nine years ago, raised a $26 million round in December 2012, and just last year pulled raised $35 million in venture funding last year. The 10-year-old company now has topped 80 percent revenue growth for the past five years in a row, with Frei saying everything is now “up and to the right.”