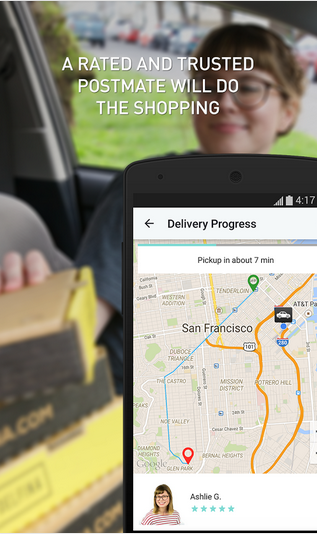 In an effort to outpace its competition and charge customers less money for deliveries, Postmates has raised an $80 million funding round that values the San Francisco-based startup at $400 million.

In a blog post, Postmates CEO Bastian Lehmann noted how the service is now live in 28 markets, having recently surpassed 2.5 million deliveries. It launched in 10 new cities just this year — including Portland — and the company’s revenue is set to grow by 10X in 2015 compared to last year. Postmates also recently inked key partnerships with Chipotle, Starbucks, and Apple.

But Lehmann sees potential for Postmates beyond just food deliveries and compared his company to the early days of Amazon.

“Almost three years ago, Postmates started with the simple idea of offering deliveries from restaurants that didn’t deliver themselves,” he wrote. “But delivery of food is only the beginning of our journey, and our vision has always been to power on-demand deliveries for all retailers and merchants in a city. Food is for Postmates, what books were for Amazon. The universal demand, a low price point, and unlimited inventory of food allowed us to reach scale quickly — similar to Amazon’s approach with books.”

The Wall Street Journal has more details of the new investment, which was led by Tiger Global Management and will be used to help Postmates expand into new cities. The Journal notes that the company, which is not yet profitable, also plans to charge $1 for delivery in high-density zip codes.

The $80 million will also help Postmates expand beyond food.

“This new funding will not only enable us to drive our geographic expansion forward, but also to grow our key teams and to explore the first of many new categories beyond food,” Lehmann wrote in his blog post.

Postmates is a leader in the food delivery space with 13,000 couriers, but faces stiff competition from new startups like Caviar, Munchery, SpoonRocket, Peachd, Lish, FoodPanda, Plated, Bitesquad, and more. There’s also more veteran players in the industry like Yelp-owned Eat24, GrubHub, and GrubHub-owned Seamless. Beyond food, there are companies like Uber, Amazon, and Google all vying to bring products to your door in the cheapest and fastest way possible.

Postmates, which employs 220, has raised nearly $140 million to date.