A former Zirx worker says she was required to work set hours and wear a uniform when she parked cars for the on-demand valet company — but she was never considered an employee.

Instead, Christina Pascual alleges in a proposed class action lawsuit that Zirx misclassified her as an independent contractor who — like many victims of the sharing economy — doesn’t get overtime pay and other benefits she says she’s owed.

Meanwhile, San Francisco-based Zirx recruits its on-demand car parkers by telling them the job offers other perks, like a chance to work a flexible schedule and be their own boss.

The back-and-forth is the same debate that’s been echoing around the technology industry for years, but is now becoming louder than ever. The so-called sharing economy has brought about a new class of businesses who keep costs low by offering services through independent contractors. Those workers typically use their own equipment and work on their own schedule, and therefore aren’t full-time employees entitled to special benefits, like overtime pay.

But the practice has come under fire more recently, and the list of companies facing lawsuits continues to grow. It includes Uber, Lyft, food delivery business like GrubHub and real estate brokerages like Redfin. Even giants like FedEx and Amazon have been sued. The independent contractor battle got so bad for home cleaning startup Homejoy, that the company went out of business.

And now it appears Zirx will be the next to take up the fight.

The company declined to answer questions for this story regarding its employment practices. Instead, a Zirx spokesman offered this statement: “Zirx has created a fun, safe and rewarding platform for our agent network. However, as a company practice, we do not comment on litigation.” 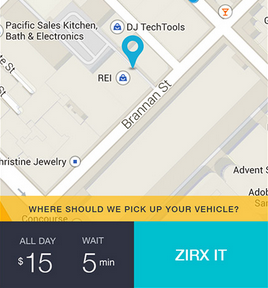 Pascual, who worked for Zirx in Seattle from November of 2014 until July of this year, alleges in the lawsuit that she was one of the startup’s so-called “agents” hired to park cars. She has filed a class action lawsuit in the U.S. District Court in the Western District of Washington, hoping to receive wages for herself and all the other car parkers. Zirx has previously told GeekWire it employs 3,000 agents spread across San Francisco, Seattle, Los Angeles and Washington D.C.

Zirx, which has raised $36 million since it was founded last year, charges users $15 per day to leave their car with an agent anywhere within a designated area. The agent then parks the car in spaces Zirx’s rents. When the user is ready to get their car back, they just tell the Zirx app where they are and the agent brings their car to them.

Pascual said in the suit that she was paid $14 per hour, plus $2 for every car parked and $4 for every additional service sold, like gas fill-ups. Later, the base pay was raised to $15 per hour. The lawsuit alleges she worked 50 to 60 hours per week, but was never paid overtime.

The lawsuit also claims “agents are required to work set shifts as devised by (Zirx),” and “at least for a portion of the class period, Agents were required to wear Defendant’s uniform and follow its dress code policy.”

Zirx’s recruiting website says agents get to set their own hours, but the company spokesman declined to offer more details on the policy in response to the allegations.