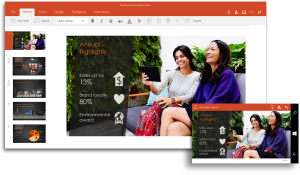 Fans of Microsoft Office have some new tools to look forward to in the coming year. Microsoft gave the public a glimpse at its version of Office for Windows 10 at a press event yesterday, and the company announced today that the next major release of its productivity suite will come in the second half of this year.

In a blog post announcing the new products, Office Product Management General Manager Julia White said that Office 2016, the first major release since Office 2013, is coming with a whole host of new features that the company plans to unveil in the coming months. Alongside that, Microsoft will be releasing a new version of Office for Windows 10 that will finally work natively on Windows tablets and smartphones.

That feature in particular is something that tablet users have been requesting since the launch of Windows 8, and hasn’t been available, even as Microsoft released a version of Office for both iPads and Android tablets.

In addition to the mobile versions of Office, the suite’s flagship programs will get some new features even before the launch of Office 2016. PowerPoint users will be able to annotate their slides in real time while they’re presenting, and Word users will be able to more easily bring in information from the web with a new Bing-powered Insights for Office feature.

The universal Office apps will be incorporated into the builds of Windows 10 released to members of the Windows Insider Program, so people will be able to test them out alongside an early glimpse at the new operating system before its release.