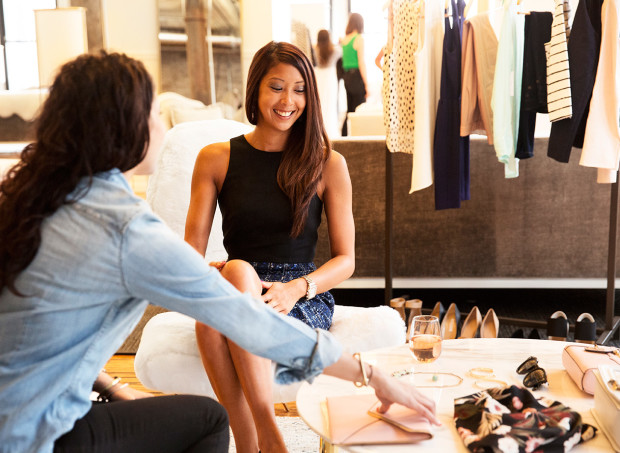 Nordstrom-owned Trunk Club is launching a personal styling service for women this fall that will handpick a selection of clothes and ship it directly to your door.

The Seattle-based department store bought the Chicago startup a year ago when it was only catering to men. Trunk Club is now signing up women to try out the service before it launches later this year. 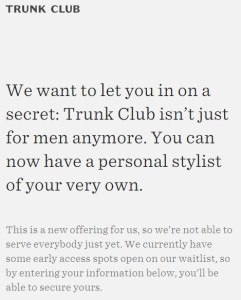 A Trunk Club spokeswoman said the service will offer women the same relationship with a personal stylist as they have been offering on the men’s side. A box of clothing is sent to each customer to try on in their own home, and then they can keep what they love and send the rest back for free.

Trunk Club will be competing against many other styling services, including well-funded startups, like Stitch Fix. All of these services are feeding off of a new e-commerce trend of “subscription e-commerce,” where boxes featuring food to make-up are delivered to your doorstep.

With some of the boxes, the items are subsidized by the manufacturer, which are hoping to get in front of a larger audience. In the case of Trunk Club, women aren’t required to sign up for a subscription and can request new clothing from their stylist at any time. Additionally, there’s no styling fees or no inventory markups.

In essence, it appears that the company is comfortable with a store’s normal mark-up, and will potentially serve as an introduction to items stocked at the department store. The boxes will mostly consist of clothing found at Nordstrom, including brands such as Vince, Theory, DVF, Equipment, rag & bone, Joie, and others.

Trunk Club is led by Brian Spaly who previously founded online retailer Bonobos while attending Stanford Business School. Nordstrom also has invested in Bonobos, including participation in a $55 million venture round last year.

In July, Nordstrom paid $350 million for Trunk Club in stock. The deal also included a long-term management incentive plan of up to $100 million, which was subject to Trunk Club’s performance. At the time of the transaction, Nordstrom said Trunk Club was nearing profitability and was expecting to more than double its annual sales to $100 million.

On its website, an example of a trunk being sent to a man included 14 items, including shoes, sweaters, jeans and polo shirts, with an average ticket price of $160 per item. A higher-end trunk, including blazers, belts and sunglasses, cost $350 per item on average. The styles vary from J. Crew-like to casual professional, but definitely cater to a upscale clientele. In addition to the mail order business, Trunk Club also operates “clubhouses” in Chicago, Dallas, Washington, D.C., Los Angeles and New York. Appointments can be scheduled for in-person fittings, where customers can meet their stylist over a pint of beer.

In the quarter ended May, Nordstrom said that its division, including Trunk Club and its Canadian stores, reported $64 million in sales. It declined to break out how much was coming from Trunk Club.