Nest Labs co-founder Matt Rogers was in Seattle on Wednesday to kick off the company’s new engineering center and to pitch his company to a room full of engineers — a.k.a. potential new hires.

The company plans to grow to about 100 employees at its new Kirkland, Wash., outpost over the next year. Teams in the Seattle area will work on the software side of things, like app and cloud development for Nest’s smart security camera and thermostat.

That’s in addition to a “top secret” project that engineers will be working on, as well. To learn more about that one, Nest’s Seattle site lead Brian Marsh joked, you’ll need to “sign and NDA and come interview.”

“There is a lot of technology and talent in the Seattle area that we don’t have in the Bay Area,” Rogers said. “Some of the top secret projects are very much around that. Things that we should be doing.”

The next gadget or major area is going to be enabling other people to do it.

Nest is a 6-year old company that has long been a leader in the connected devices space, most famous for its smart thermostat. Google acquired the company 20 months ago for $3.2 billion, back when Nest had just 280 employees. Now Nest has more than 1,100 workers, and is steadily opening new offices — like the one that will be located inside Google’s Kirkland campus.

Pushed for details on the secret project during an interview with GeekWire, Rogers would only say it’s “top secret stuff.” But he did shed some insight more broadly on how the company plans to build that smarter home he talks about so much. 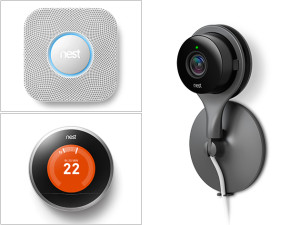 The next major area for the company will be about “enabling other people to do it,” Rogers said. “There’s only so much we can do, right? It just doesn’t scale if everything has to come from us.”

That’s the idea behind the company’s Works With Nest program, which helps its smart devices connect to devices from other manufacturers, and Nest Weave, the company’s new communication protocol, which it’s sharing with other devices.

In a nutshell, he said Nest doesn’t just want to make smart hardware. It wants to make the fabric that will connect and enable all of the Internet of Things devices that will soon fill peoples’ homes.

Rogers said there are a lot of layers to that vision, from building apps for other manufacturers’ devices, to cloud infrastructure, hardware and communication technology.

“Today, if you were to build an IoT company, you would have to build all those things yourself,” he said. “So we’re going to try to take some of those burdens off of those companies.”

Nest doesn’t monetize these other programs right now, but Rogers said that’s how the company will help drive a critical mass of IoT devices, leading to more adoption.

“And then you’ll have more Nest products in your home, too,” he added. “It’s good for everybody.”

As for what we can expect to see roll out of Nest’s own factories, the company wasn’t giving many hints. Rogers said it has no intentions of building devices for outside the home, eliminating the possibility of office-focused products. He also said video will be a big area of focus, noting that Nest wouldn’t have spent $555 million to acquire a webcam company Dropcam if Nest didn’t have big plans for that space.

He said most use cases for the company’s Nest Cam revolve around security right now, but it’s exploring other potential applications. One technology the company said it’s working on is using computer vision allowing the camera to be able to understand what it’s seeing and to respond accordingly.

“It’s a cool area,” Rogers said. “You see how people are using it, and then you learn from them how to make the experience better.”