PC users are going to have a new assistant with the launch of Windows 10. Cortana, the virtual assistant that Microsoft launched with Windows Phone 8.1 last year, has made the leap to the desktop.

Joe Belfiore, a Corporate Vice President in Microsoft’s Operating System’s group, revealed the assistant’s new home in the task bar on Windows 10’s desktop. Users can interact with her by speaking to their computer, or by typing commands into the Cortana search box. 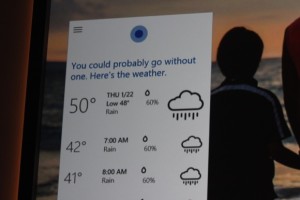 Like on the phone, Cortana will search the web for users’ queries, keep track of their likes and dislikes in a digital notebook, and offer Bing-powered insights like who is expected to win a sports game. She has also received some PC-specific tweaks as well, like the ability to search all the files on a computer. Users can ask her to do things like show a particular PowerPoint presentation, or photos from a given time period.

Belfiore also touted the assistant’s use as an assistant for the whole family in a communal space by asking Cortana to play some music. That functionality is similar to Amazon’s Echo speaker, which combines a wireless speaker with a personal assistant. Windows 10 devices in a home’s central location could serve a similar purpose.

Between Google Now cards on Chrome and Cortana on the PC, Apple is the only desktop OS maker that hasn’t announced a version of its virtual assistant for computer users.