Microsoft’s Cortana virtual assistant will expand to iPhone and Android as part of a broader effort by the company to help users transition seamlessly between a Windows 10 computer and any mobile device.

The company announced this morning that Cortana will be delivered by a new Windows 10 “Phone Companion” app designed to help users set up and maintain their non-Windows phones to work with Windows’ cloud features. In addition to Cortana, apps include OneDrive, OneNote, the Office suite and an updated Xbox Music app that will let you stream music stored in the cloud to any device. 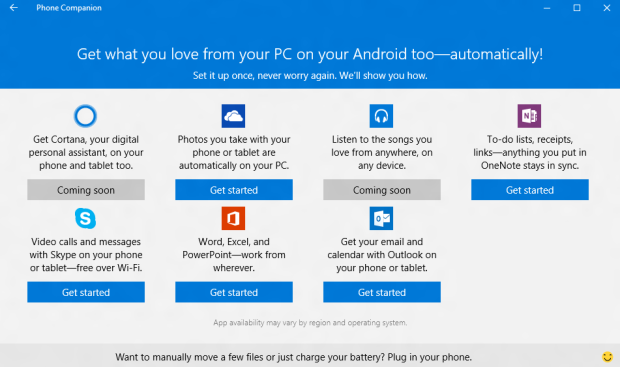 The Cortana app will allow users to set up reminders, track flights and anything else the digital personal assistant can help with on Windows devices, but will be locked inside an app, not integrated across the operating system. That means there’s no “Hey Cortana” action to quickly access voice-activated features, but items in Cortana’s Notebook will be available across devices, for example.

Cortana, named after the AI character in Microsoft’s Halo video games, debuted on Windows Phone and will be expending to the desktop and tablets with Windows 10. Speaking at a conference in Seattle last year, a Microsoft program manager acknowledged that the group was grappling with the question of whether to keep Cortana as a Windows exclusive, to help differentiate the Microsoft platform.

In a sign of its competitive spirit, Microsoft has used Cortana to poke fun at Apple’s Siri in Windows television ads. But the Redmond company has increasingly been releasing apps and services for Android and iPhone as part of its broader cross-platform strategy under CEO Satya Nadella.

Microsoft realizes that “many people use iPhones or Android phones, and we want them to enjoy some of their Windows experience and content while away from their Windows 10 PC,” wrote Microsoft Vice President Joe Belfiore in a post on the Windows blog today.

Many of the Microsoft apps that will be available via Phone Companion already exist on other mobile platforms, but Phone Companion will make sure new users are set up to sync data between devices and match a Windows phone experience as closely as possible. For example, OneDrive will automatically sync photos from the user’s device to the Windows 10 Photos app.

Members of Windows Insider Program will have access to the Phone Companion in a few weeks. The Cortana app will come to Android in June and iPhone later in the year. Streaming tunes via Xbox Music will be available in beta later this summer.