When Windows 10 launches later this year, people who own devices running Windows 8.1, Windows Phone 8.1 and Windows 7 will be able to install the new OS for free…for the first year.

Terry Myerson, the company’s Executive Vice President of Operating Systems, took time during his talk on stage at Microsoft’s Windows 10 event to tout the value of “Windows as a service,” in a discussion that seemed increasingly like preparation for announcing a new subscription-based pricing model.

“Windows 10 changes the rules of the game and redefines the relationship between us and our customers,” he said. 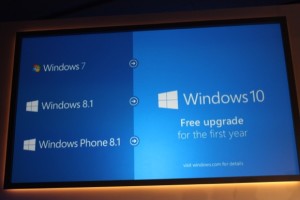 Myerson touted the company’s ability to continually keep Windows 10 up to date with new innovations as time goes on, including security updates and new features. Myerson said that the company also wants the new operating system to reduce the fragmentation in the Windows ecosystem, which will make it easier for developers to build new applications.

The free upgrade offer comes almost a year and a half after Apple announced that all of its operating system upgrades on the Mac will be free going forward.

But with all the talk about Windows as a service, Myerson didn’t give any specifics about what that actually means for consumers. During the question and answer session following the keynote, CEO Satya Nadella declined to say whether the company would be moving to a subscription model for Windows in the future.

“There is no fundamental shift to our business model that we are announcing today,” he said.