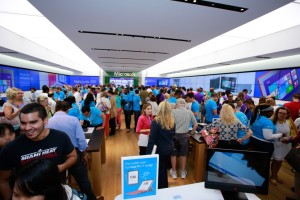 Residents of Sydney, Australia will be saying “g’day” to Microsoft’s first retail expansion outside North America. The company announced today that it’s opening a flagship store in the down under metropolis at the Westfield Sydney on Pitt Street Mall.

Like Microsoft’s other retail endeavors, this store will serve as a showroom where people can try out products like Xbox consoles, Surface tablets and Windows PCs. It will also house an “Answer Desk” where people can go and get questions about Microsoft products answered. Currently, the company has more than 110 stores in the U.S., Canada and Puerto Rico, along with 17 store-within-a-store locations in China.

This Sydney location will be an important toehold for the company, since it will be the first time Microsoft has attempted to push its flagship retail ambitions to a new region.

The announcement comes at a key time for Microsoft, which is slated to release Windows 10, the next version of its operating system, later this year. The update will bring a number of major changes to the entire spectrum of devices Microsoft supports, and has the chance to boost sales of Windows devices. It’s also likely to spawn plenty of questions, so having a retail presence around the world will be a boon to Microsoft.

In addition to retail uses, Microsoft also committed to supporting the local community by volunteering its staff’s time, conducting workshops at the store and supporting science and technology education.