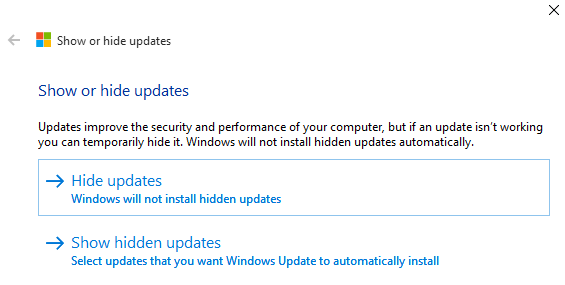 Last week, Microsoft announced that Windows 10, once installed, will automatically update by default, with users having no option to stop buggy updates from messing up their computers. But the company has quietly rolled out an option for users to disable automatic updates, giving users the ability to block a troublesome update or driver.

Users can now download the “Show or hide updates” troubleshooter package from Microsoft, which gives them more control over when or if they want to update their system. The troubleshooting page first tells users to uninstall the offending driver or update, then download the package to turn off future updates. However, the package can also be used before a problem strikes to hide all Windows updates.

While having this option is good for more advanced users, Microsoft’s plan to get everyone running the same version of Windows 10 will help the company and users stay on the same page about features and take a step out of the standard troubleshooting process.

The troubleshooter package was initially released for Windows 10 Insiders, people who have been testing the new operating system for Microsoft, but Ed Bott reports on ZDNet that it also appears to work with the public version of Windows 10 to be released publicly later this week.

With the millions of beta testers in the Windows Insider program, most problems will be spotted before being automatically pushed to users. Buggy updates may still cause problems for some users, but automatic updates will likely result in a more stable and secure Windows environment overall.