It’s only been five months since Kieran Snyder and Jensen Harris left corporate jobs for the startup world, but they’ve already landed some funding for their new company.

Harris confirmed that Textio just closed a $1.5 million round today, but wouldn’t provide further details on the investors or how his company plans to use the fresh funding.

Textio, which launched this past fall, has developed a tool that is somewhat like an SEO for internal business documents. Textio’s software analyzes a company’s job descriptions, performance reviews and other filings to uncover unknown insights, with a goal of determining whether the text is resulting in the desired outcome for the company.

Textio was formed after Snyder conducted research on gender bias in performance reviews in the tech industry. Snyder is a linguistics expert who previously worked at Amazon and Microsoft’s Bing unit. Harris, meanwhile, spent 16 years at Microsoft, including stints running the user experience team for Windows 8.

GeekWire spoke with the founders — Snyder is CEO; Harris is CTO — back in October, just as Textio was launching.

“For any type of text, we want to be able to extract business insights,” Snyder said in October. “We’re exposing this as a service. It’s not a consulting model. That’s a key element of how we work, which also places the bar very high on user experience and document security.” 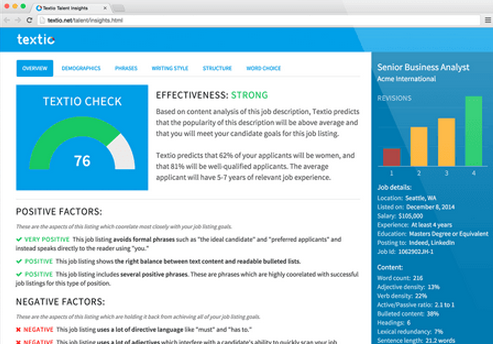 For now, Textio is targeting recruiters interested in improving their job descriptions. One of the company’s first demonstration projects involves analyzing publicly available text on the Glassdoor employment review site, correlating job descriptions with company rating to determine how those descriptions can result in hiring the right or wrong employees.

“Textio tells you who your job description will reach and how you can improve it to appeal to the candidates you want,” the company’s website reads.