After 12 years at the helm of Marchex, Russell Horowitz is stepping down as CEO of the Seattle call advertising company. The former Go2Net CEO will remain on the board, but going forward the company will be led by Marchex co-founder Pete Christothoulou.

Horowitz said it was his idea to step down, and that he’ll continue to hold onto his significant shares in the company. He said the decision will free him up to “focus on long-term strategy and related opportunities.”

“It has been my privilege to have led the founding of Marchex and to serve as its CEO and Chairman for more than a decade, growing the company from an initial idea to where we are today,” said Horowitz in a statement. “I see a transformative and significant growth opportunity as we move forward, and I will continue to support the executive team and the company’s overall ongoing needs. This action is also intended to foster growth in the company’s executive leadership, and we will continue actively looking for new senior team members to join and deepen our team.”

In an email to GeekWire, Horowitz said that he plans to remain active at Marchex in his role as a board member.

“I found that as CEO and Chairman, I had less and less time to focus on the areas I really love, ranging from creative areas like strategy and deal-making to helping ensure that Marchex has the talent and resources, both at a management and board level, we need to execute and thrive,” he said. “Now, I’m getting back to my roots.”

“Marchex is uniquely positioned to play a leading role in helping advertisers and agencies successfully navigate the transition to mobile advertising. I look forward to supporting Pete with his expanded responsibilities and to continue working with Russ in his evolved role,” Kokich said.

Marchex, which went public in 2004 and launched its call advertising business in 2009, has fallen on tough times on Wall Street. The stock is down 65 percent over the past 12 months, giving it a market value of $173 million. The stock fell sharply last fall after a key deal with Allstate fell apart.

In addition to today’s executive changes, Marchex also released fourth quarter earnings. It posted revenue of $33.3 million, down from $39.7 million for the same period in 2013. That beat analysts’ expectations. The company also showed net income of $571,000 for the quarter, down from $597,000 for the same period in 2013. For the year, the company lost $19.4 million, which included a non-cash charge of $22.3 million. Here’s a look at the results: 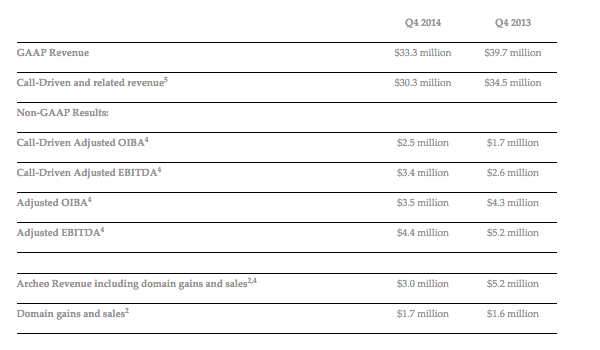