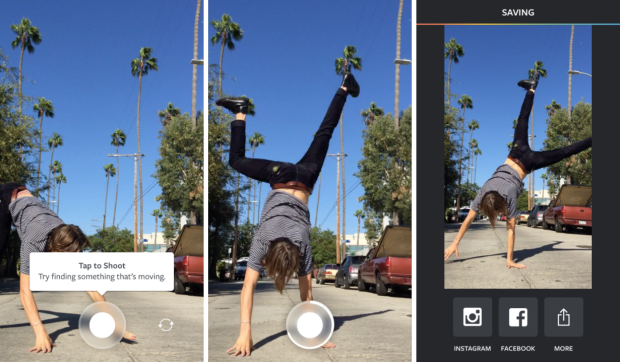 The Live Photos feature on the iPhone 6s and 6s Plus is a pretty neat party trick, but there’s no good way to share them. And with only a small subset of phones currently able to shoot them, Live Photos aren’t likely to gain the attention of other popular image formats. But an app released today by Instagram allows anyone to shoot the short videos that make Live Photos so engaging.

Boomerang is an iOS and Android app that quickly captures one-second clips, loops them, then saves them to your device’s camera roll. The key with Boomerang is that the moving pictures are saved as a standard video file, which can be easily shared via Instagram, Facebook, Twitter or email.

Boomerang isn’t the first video shooter to jump on the looping images bandwagon. GIF repository Giphy released Giphy Cam in August. That app lets you quickly make a GIF, overlaid with early-web flourishes like digital hearts or Deal With It glasses, and export it as a video for use on social media. Phhhoto, launched last summer, has a similar low-fi aesthetic complete with its own social network.

However, “Boomerangs”—Instagram’s name for the resulting footage—are high-quality videos and are much shorter than your standard GIF. The one-second loop is just enough to give the picture a sense of motion, but not enough to really get much movement.

The app is the fourth standalone app from Facebook-owned Instagram. The other apps include Layout, which lets users arrange multiple photos into one image for posting across social media, and Hyperlapse, which smooths out timelapse footage. And, of course, there’s the main Instagram app that lets users share filtered photos, which was first introduced five years ago this month.