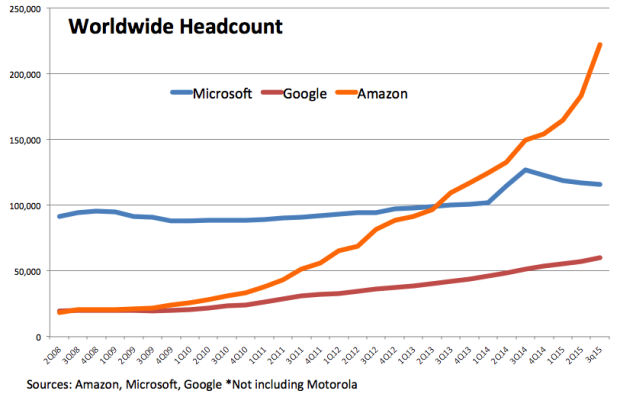 The Seattle e-commerce giant added 39,300 employees during its most recent quarter, which is record quarterly growth for the company. Amazon’s headcount also surpassed 200,000 for the first time and is now at 222,400 — that’s up 49 percent from this time last year.

As the chart above shows, Amazon’s employee growth has skyrocketed in the past few years. The company added 72,900 employees in the past year alone.

Amazon’s growth is evident at its Seattle headquarters in the South Lake Union neighborhood, where construction cranes dot the landscape soon to be filled with multiple new Amazon buildings. The company employs 24,000 workers in the state of Washington and estimated last month that its economic impact came out to about $5 billion in Washington last year.

It’s important to note that Amazon’s headcount includes full-time and part-time workers at the company’s fulfillment centers. Still, the growth is staggering in comparison to Amazon’s tech rivals.

Amazon said earlier this week that it has more than 90,000 full-time employees working in its 50 fulfillment centers and 20 sorting facilities in the country, which means that the company employs 132,400 workers outside of the fulfillment centers.

More recently, the company has hired more than 25,000 full-time workers for its fulfillment and sorting centers since August to “meet customer demand and prepare for the upcoming holiday season.”

Amazon has been adding new robots and boosting automation in its fulfillment centers — it had 15,000 Kiva robots at the end of 2014, but that number has increased to 30,000. However, the hiring bolsters the company’s claims that humans will remain “key to the process” of sorting, filling and shipping packages.

In its quarterly earnings call on Thursday, Amazon said that it is intentionally converting those temporary workers to full-time. The company has opened 14 distribution centers and four sorting centers in the U.S. this year.

Amazon beat Wall Street expectations today with a surprise profit of $79 million, sending the stock up more than 10 percent in after hours trading.