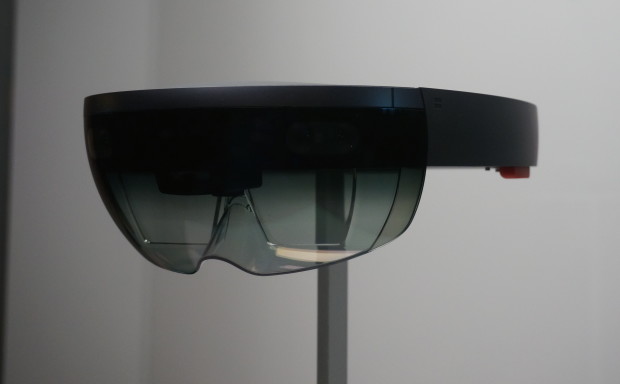 My first experience with Microsoft’s HoloLens augmented reality headgear left me feeling hopeful about the hardware’s opportunity as a platform for developers, thanks to all the work Microsoft has done to create elegant tools for developing with it. But along with that, I also got a more complete picture of the state of the hardware beyond what Microsoft has been showing off at its press events.

Here are five key insights that I brought out of the experience:

1. You won’t wear this device all day.

In my brief demo, I found the HoloLens largely comfortable to wear (though my massive eyeglasses got in the way a bit) and the device didn’t nauseate me at all. Overall, it’s the sort of gizmo that I could see myself wearing for long periods of time if need be, since Microsoft has set it up so that the weight of the device is placed over the user’s head rather than on their nose.

That said, the shaded visor of the HoloLens convinced me that I wouldn’t want to wear it for every waking minute. This feels like a device that’s designed to be comfortable for use during the periods of time when viewing holograms will come in handy, but is best taken off when you don’t absolutely need it.

Case in point – I could see myself using the device when unwinding after work, but I’d certainly take it off for having dinner with other people.

That’s a marked difference from Google Glass, which is meant as a companion you always wear, no matter where you are. Of course, we saw how well that went over with people who weren’t Glass wearers, so this decision seems like it’s for the best.

2. Nobody is sure what HoloLens apps should look like.

Listening to a panel of Microsoft partners who are already developing for the HoloLens, it’s clear that they’re still figuring out, through trial and error, what the best interfaces for the device will look like. That makes sense, since nobody has made a product quite like this before, and any ideas about what will and won’t work will depend on copious experimentation.

I spoke with a member of the HoloLens team during the demo yesterday, who said that Microsoft has been doing a bunch of its own user testing to determine best practices for building apps on the platform. The end result will be documentation for developers that includes a set of human interface guidelines that contain tips and suggestions for making the best holographic apps possible.

So far, there are a few things that developers have learned while working with the platform. Heads-up displays that follow the user around close to their vision (similar to the interface from the “Halo” series) haven’t worked as well as controls that are set up to look like they exist out in the world. It may seem like a bad idea to make it possible for people to literally walk away from important menus, but developers can compensate for that by letting users call interface elements back in front of them with a voice command. 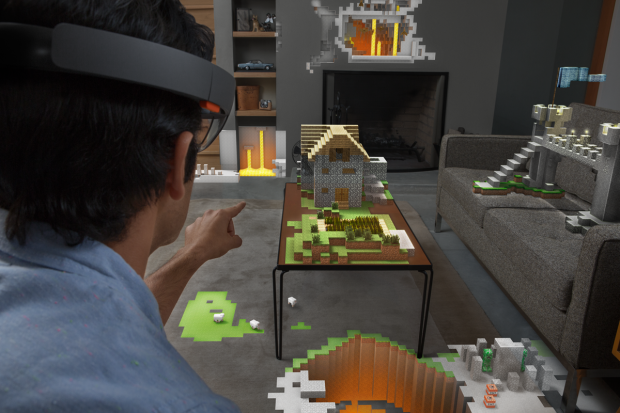 The most obvious feature of the HoloLens is the visual display of the holograms, but I was most impressed by the headgear’s positional sound features and ability to recognize my voice. When I set up a sound file inside my program, it was actually attached to one of the holographic objects, which meant that the position of the sound changed as I turned my head and grew softer as I walked away from the (simulated) position of the hologram.

That feature really helped offer a sense of place throughout the demonstration that left me feeling grounded in the digital realm created by the HoloLens. That, coupled with the device’s incredibly sensitive microphones (which did an excellent job of handling voice commands during my demo), makes for a much slicker experience than just raw display of holograms and gesture input.

4. The field of view is narrower than you expect.

All of Microsoft’s promotional materials (along with the company’s on-stage demos) seem to indicate a holographic world with a wide field of view. The HoloLens hardware isn’t quite that capable. Holograms will only appear in a rectangular band in the center of a user’s vision, in part because of the way the HoloLens lenses are set up inside the glasses.

Following my demo, HoloLens chief Alex Kipman said that the restricted field of view was important, because it would give people a way to take advantage of their peripheral vision. To a certain degree, that makes sense. It was nice having my lateral peripheral vision anchored to an unaugmented reality so that I could better see people without the digital world blocking my view of them.

But the edge of the holographic image was particularly abrupt along the top and bottom of my field of vision, which could prove jarring and disappointing. I had a better handle on the field of view issues the further I went into the demo, and they bothered me less as time went on, but I still think the experience would benefit from a wider angle display.

I’m not alone in feeling frustrated about the field of view, either. Every attendee who I’ve talked to about their HoloLens experience has mentioned it. There’s an easy reason why: getting close to holograms feels way less immersive when the image all of a sudden gets cut off along the edges of your vision. I’d ideally like to see that improved before the hardware ships, but it’s possible that’s just a function of physical restrictions that Microsoft can’t get around without sacrificing other aspects of the HoloLens’s performance.

5. HoloLens may seem like science fiction, but it isn’t vaporware.

When Microsoft first showed off the HoloLens in January, there was plenty of speculation about whether the device would actually ship. This isn’t a product that’s completely ready for prime time as of this second, but after going hands-on with the hardware, I feel confident that Microsoft will ship the HoloLens to consumers and developers. (Though it may take a year or more to get there.)

There’s a chance that Microsoft will still axe the product, but the company says that it plans to ship it within “the Windows 10 timeframe.” A New York Times article revealed that Satya Nadella is fully on board with HoloLens, and sees it as a key bet for Microsoft to make. With that sort of backing, it seems to me like we’re likely to see the HoloLens hit the market.

Have any questions about the HoloLens? Lay them on me in the comments, or tweet @belril. I’ll do my best to answer the ones I can, but it’s worth noting that there’s still plenty of information we don’t know about the device yet.