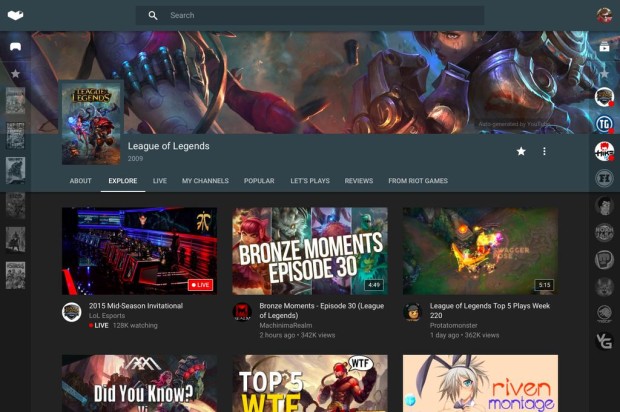 After losing Twitch to Amazon last year, YouTube is rolling out its own video game-streaming platform. The new site, YouTube Gaming, will allow users to stream live gameplay and record it straight to a YouTube video for easy sharing and replaying.

YouTube Gaming will follow a similar format to YouTube, where fans can follow certain channels. But they will also be able to browse by game. Live streams will automatically be converted to YouTube videos. The new platform will launch later this summer in the U.S. and U.K. with low-latency chat so gamers can converse with fans while playing.

YouTube gaming is more focused on building a library of videos than Twitch. Users of the new platform will see a mix of live and recorded content on their feed. Live videos will also have the ability to pause and rewind at any point during any live stream, which Twitch also doesn’t allow.

A new player has entered the game. pic.twitter.com/mV5YqHiG0K

In May 2014, it appeared that Google was the top bidder for live-streaming gaming service Twitch, beating out Microsoft for the three-year-old company. But Amazon stepped in at the last minute to scoop Twitch up for a cool $970 million, surprising many.

Since then, Twitch has continued to dominate the game-streaming world. Last year, more than 1 million people watched Twitch streams. It even hosted yesterday’s Oculus announcement live stream. The Twitch app is also available on major gaming consoles and even integrated into some of their sharing apps.