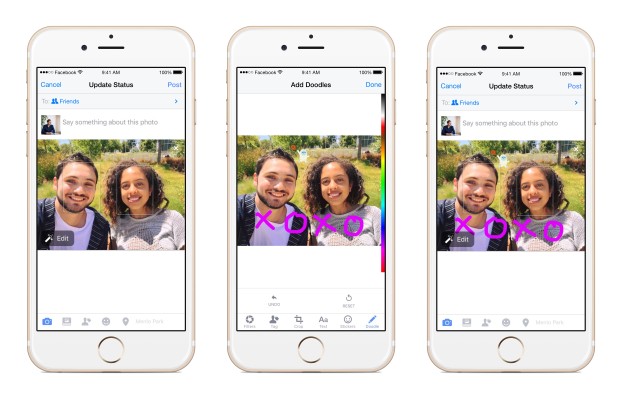 A picture is worth a thousand words, but how much is a picture worth if you doodle on it? Facebook thinks it might be worth even more.

Facebook is rolling out Doodle to its main mobile app today. The feature, reminiscent of similar features found on Snapchat, joins the built-in filters, text overlays and stickers users can add to their pictures through the Facebook app.

To add a Doodle, users choose a picture to upload, hit the edit button, then choose the Doodle tab to start drawing. To choose the color, users can slide their finger up and down the color palette, and change the pen size from by sliding their finger left and right. Users can draw attention to parts of a picture with a splash of color, add in a small doodle to illustrate a point or even create a new illustration on top of the uploaded picture.

Facebook has been slowly ramping up their in-app photo editing recently. Doodles came to Messenger last year and user have been able to put stickers on pictures since February. As the social network tries to bring more photo editing features into its main apps, it may be trying to fight off competition from other photo-sharing platforms like Snapchat and even Twitter.

With nearly 2 billion photos uploaded to the social network each day, photos are a central part of how people use the platform. Editing those photos within the app may tie users to the platform even more. The new feature is rolling out across the iOS and Android Facebook apps today.