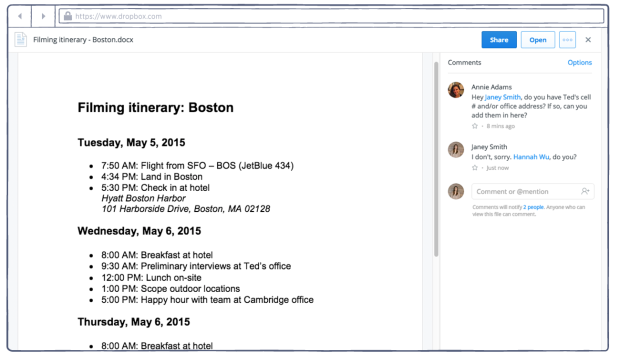 Dropbox rolled out a new comments feature today that’s targeted at helping people collaborate using the online storage service. Now, anyone with a Dropbox account can leave comments on shared files through the service’s desktop web interface, and can loop in other people to offer further insights.

The system is simple: users who share a file can post comments on it, and use the “@” symbol to bring in a named user or anyone with an email address. If they have a Dropbox account, they’ll get a notification of the file being shared with them, along with a direct link to it where they can comment along with other people and view the file’s contents.

Users will get notifications via email of any new comments, though it’s possible to turn them off for particularly noisy threads. The owner of a file can also choose to turn off comments on documents that they share, if they’d rather have a conversation-free experience.

Thanks to Dropbox’s partnership with Microsoft, people who need to edit Office documents can get a direct link to do so through Microsoft’s web and desktop apps and have the changes show up alongside the existing comments.

The collaboration service is part of the company’s move towards playing a greater role in the workplace. Dropbox has proven popular among consumers, and the company is pushing hard to translate that into success in a crowded market where it’s competing against the likes of Box and Microsoft.