Cyanogen Inc. is launching a new effort to take its Android-based operating system further beyond its hacker roots — posing a stronger challenge to Google in the mainstream Android smartphone market with a new Alcatel device, a partnership with chipmaker Qualcomm, and rebranding of the company … as a start. 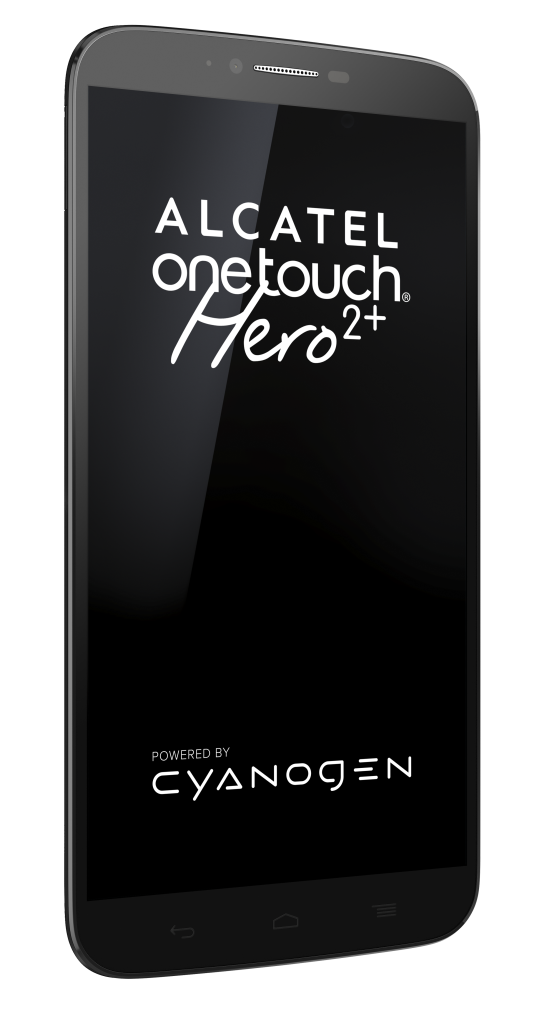 Alcatel just announced a new smartphone, the HERO 2+, preloaded with Cyanogen OS and slated to go on sale in North America early in the second quarter for $299. It will be sold online without a wireless contract, with the ability to work on the AT&T and T-Mobile networks in the United States.

Cyanogen, with nearly 20 million users and an active open-source community, has been preloaded on other devices in the past. But the launch with Alcatel represents a much bigger opportunity, said Cyanogen co-founder and CTO Steve Kondik in an interview.

“There’s no fine print when you buy this thing. You don’t need an invite or anything like that. Just go buy it.”

Separately, Cyanogen last night announced a new partnership with Qualcomm to help device makers use Cyanogen OS and its features on smartphones running Qualcomm Snapdragon processors, starting with the release of the Qualcomm Reference Design in April.

Also over the weekend, Cyanogen debuted a new look — designed to reflect the qualities of “fresh, expansive and free.”

Cyanogen Inc. was formed in 2013 to commercialize the CyanogenMod open-source project, which Kondik started in 2009. The company has grown to 80 people across offices in Seattle and Palo Alto, Calif., and it’s planning to continue growing as it takes on bigger challenges.

In a wide-ranging interview, before leaving for this week’s Mobile World Congress in Barcelona, Kondik talked about the company’s plans to build a new platform based on the “Open Android” approach.

“It’s not necessarily about us trying to get rid of Google,” he said. “It’s more about us realizing that there are far more players.”

“That’s the platform we’re really trying to build,” he said. “I’m not going to go too far talking about that yet, because we haven’t shipped it yet, but that’s where we’re really going. We really want to eliminate the bloatware problem by letting more apps become first-class systems if the user wants them to be.”

It’s going to have some capabilities that have yet to be seen, in how apps work together, and how they’re able to share data with one another. …We’re not trying to build that walled garden. We’re trying to build something completely different.
The company acknowledges that it’s raising a new round of funding, following earlier rounds of $7 million and $22 million, but Kondik declined to disclose any specifics or comment on reports that Microsoft will be a minority investor in the new round, which will reportedly be as large as $70 million.

In the meantime, the announcements today represent a key step in the effort to broaden the market for Cyanogen-powered smartphones.

“Today we’re still geared toward the enthusiast market, which is actually pretty big, and it’s growing,” Kondik said. “Anybody in their 20s or 30s who’s looking for something completely different than anything else — we’re definitely filling that niche. At the same time, we’re also trying to grow past that. … A lot of it is taking the stuff that we’ve built and making it even more powerful by making it easy to use.”

Kondik said the company’s “biggest strength is this open-source community that is constantly innovating and coming up with new stuff. We try to feed everything that we can back into that, build on top of that, and extend that.”

But as Cyanogen gets looks to expand its presence, it needs a larger team to support its growth. The company has 60 people in its Seattle engineering office, and is quickly outgrowing its space. “We’re going to double our team pretty quickly,” Kondik said. “Over the next year, we’re going to be scaling up quite a bit.”

Kondik described the announcements today as the beginning of a big year.

“We need to get on more devices, and this platform that we’re building — I can’t talk too much about it, but it’s going to have some capabilities that have yet to be seen, in how apps work together, and how they’re able to share data with one another,” he said. “We’re looking really hard at this, and how to do it from the perspective of the user being in control. That’s the big thing where we’re trying to be completely different than everyone else. We’re not trying to build that walled garden. We’re trying to build something completely different.”