Viral, shareable content is Ben Huh’s bread and butter. His business is predicated on the notion that when we see an adorable kitten, a funny meme, or a GIF from our favorite movie, we’ll share it with our friends. 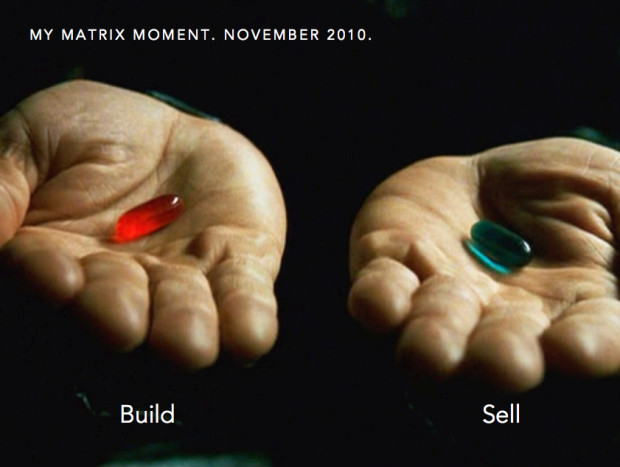 It’s fitting, then, that the Cheezburger CEO and co-founder used a pop culture reference to describe his entrepreneurial journey to the crowd at GeekWire Startup Day.

Running a startup, Huh says, is a lot like taking Morpheus’s red pill — and seeing deep the rabbit hole goes.

Huh used this Matrix analogy to describe the conundrum that some lucky entrepreneurs face: to sell or to build.

As expected, Huh’s talk was funny and topical, but he also displayed surprising candor and sincerity for a guy propelled to fame by Lolcats. He discussed the challenges, both personal and professional, that came from rejecting venture capitalists’ blue pill and choosing to build.

“I took the red pill in 2010,” he said. “I shipped a product in 2014. Think about that journey. And a lot of it wasn’t very fun. Along the way we learned that having ambition isn’t good enough.”

Huh confessed succumbing to a pitfall that many entrepreneurs face: The Atlas problem. Like the mythic titan doomed to forever hold up the celestial spheres, Huh tried to carry all the weight of his little startup universe on his shoulders. Learning to lead effectively, Huh explained, was just as imperative as building a successful product.

“This is the greatest lie that’s ever told to entrepreneurs.” he said. “You absolutely, positively, cannot hold up the universe.”

When Huh’s shoulders could no longer support the weight, he brought on former Microsoft and Yahoo executive Scott Moore to serve as president and COO and began receiving CEO coaching. He learned to meditate to help with cool-headed decision-making and found subtle ways to improve the daily grind.

Of course, all the meditation in the world can’t completely mitigate the stresses of leadership, so Huh offered some words of comfort to his fellow entrepreneurs.

“If you screw this up you will not die. In fact, you will probably be more experienced and probably will get a better job. If you screw up at your startup the most probable outcome is that you will receive a raise at a bigger company. So when you have that really stressful day and you feel like the weight of the world is on your shoulders just remember that: I’m gonna get a raise.”

Watch the full video above, and stay tuned for more highlights from GeekWire Startup Day in the weeks ahead.