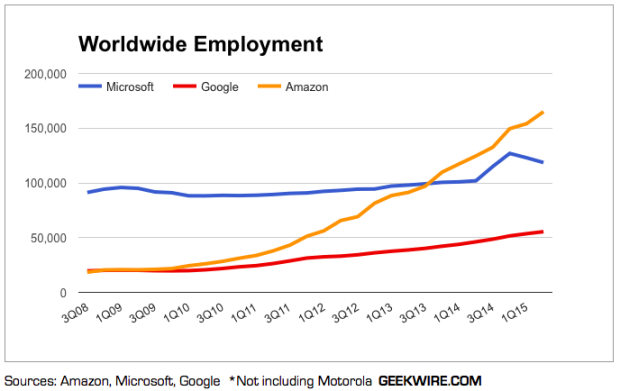 Amazon’s employee base continued its meteoric rise during the beginning of this year, reaching an even 165,000 employees by the end of the first quarter. That’s a 32 percent increase year-over-year, and a 7 percent increase over the fourth quarter of 2014, when the company had 154,100 employees.

It’s another sign of the tech giant’s continued rise, and is fueled by both growth from its office employees as well as continued hiring for work in Amazon’s 109 fulfillment centers, putting together packages for shipping to customers. Overall, the company had a better than expected first quarter, reporting $22.7 billion in revenue.

Microsoft’s headcount tells a different story, however. The company reported today that it has 118,584 employees, which is a net loss of more than 4,300 people from the Redmond-based company’s headcount in the last quarter of 2014. It’s hardly surprising, since Microsoft said last year that it would be laying off 18,000 employees, or roughly 14 percent of the company’s entire workforce.

Since then, the layoff process has continued. Earlier this month, the company completed the last of its major waves of layoffs, so we may see the company’s headcount dip slightly in the second quarter of this year before leveling off.