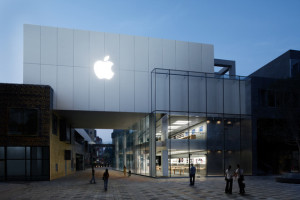 Android users who want to make the switch to an iPhone may have an easier time of it soon. 9to5Mac reports that Apple plans to offer store credit for people who trade in their Android smartphone for an iPhone, in a move to woo more switchers to its mobile platform.

The system, which is slated to roll out in the coming weeks, will allow people to bring in their device, get its condition assessed by an Apple Store employee, and then receive a certain amount of credit for the purchase. It’s similar to Apple’s existing program for people who want to trade in their iPhones in order to purchase a new device.

Both are designed to boost sales of Apple’s smartphones, since they cut down even further on the price of obtaining an iPhone, and make it easier for people to afford an upgrade.

The plans come at a key time for Apple. The Apple Watch will be available for pre-order starting April 10, and owning one requires an iPhone. What’s more, the larger screens on the iPhone 6 and 6 Plus have proven very appealing, with Apple selling 75 million handsets during its holiday quarter – the most it has ever sold in a single three month period. Offering more incentives to switch from Android could result in greater sales down the road.