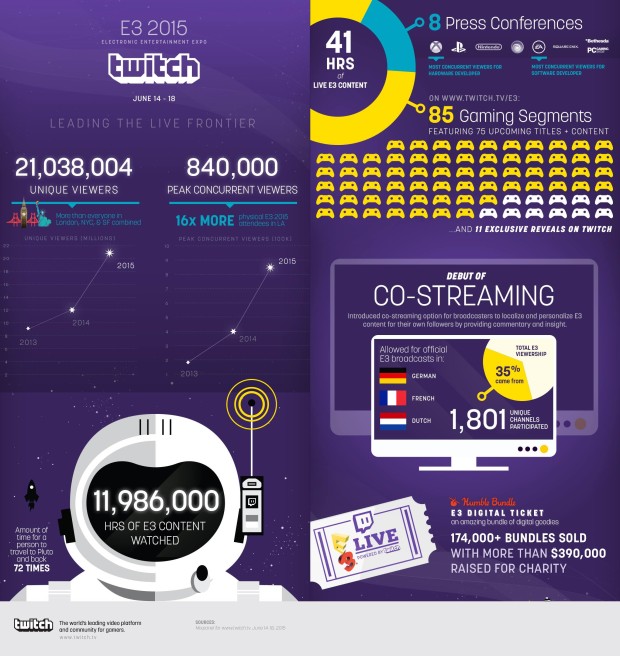 Amazon may not have had a huge presence at E3, the annual videogame conference in Los Angeles, but its video game streaming arm could be found everywhere. Twitch announced today that more than 21 million unique viewers tuned in online to watch live content, peaking at more than 840,000 concurrent users.

Twitch streamed eight press conferences, including Nintendo, PlayStation, Xbox, Ubisoft, Electronic Arts and Bethesda. Each of those events averaged at least 500,000 concurrent viewers, with two surpassing 700,000 and 800,000 viewers each.

“After crunching the numbers from E3 2015, no other live streaming platform came close to the success the Twitch community achieved,” said Twitch’s Director of Programming Marcus Graham. “We continue to be both appreciative and awestruck by the support we get from our passionate community. We credit them for not only tuning into hours and hours of E3 gaming goodness, but for bringing their own voice to the mix by co-streaming our broadcasts. When it comes to major trends coming out of E3, the appeal of live social video is definitely one of them.”

The company’s online viewership represents a major boost in audience for the show, which accommodated 52,200 people in person. At Twitch’s peak, 16 times as many people tuned in at once than the show’s in-person attendance. Multiple news outlets and streaming providers were simultaneously providing live streams of many events, so capturing an audience of this size is impressive, especially as it fends off new competition.

Google, in particular, is one, which hosted a 12-hour live stream marathon filled with interviews, commentary, and exclusive demos of the newly announced games. Google’s presence at the show was a preview of sorts for YouTube Gaming, which will be a competing video game-streaming platform.

Google’s decision to launch a competitor was spurred by losing Twitch to Amazon, which acquired the company last year for $970 million. In comparison, Google said its 12-hour marathon pulled in a whopping 8 million views for a total of 2 million hours of video watched.