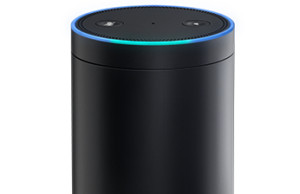 Amazon’s Echo virtual-assistant-in-a-speaker received a small update today that improves the service for sports fans and music fans. People who enjoy streaming music from Pandora’s radio service can now start up a radio station just by speaking to their Echo.

For example, Amazon recommends people try asking “Alexa” for either a station by genre (like pop or rock) or telling the device to “create a station for” a particular band name. Once music is playing, users can then pause and skip tracks using voice commands, as well as tell Alexa to give a track a thumbs up or thumbs down to train the station to their taste.

Echo already supports basic playback control on services like Apple’s music app on the iPhone and Spotify, but this integration with Pandora makes it possible for people to control an entire experience with just their voice.

Just in time for Major League Baseball’s opening day, Echo also gained support for baseball and Major League Soccer scores and schedules. Users can ask Alexa about the score of the latest Sounders game, and get information about the next time the Mariners will be up to bat. Those capabilities come alongside existing score and schedule information about NHL and NBA games.

Amazon’s support for Pandora is interesting, since the company already has its own music store and streaming service, which was recently updated on iOS to provide users with ad-free radio stations centered around artists and genres.

The new features are part of the continuing improvements to Amazon’s assistant. Last month, the company partnered with Here Maps to provide real-time traffic data to its users.