After years of planning, Amazon will finally begin moving into its new campus near downtown next week.

Construction on the entire project — which will consist of 4 million square feet of office space across three towers, a large meeting center and epic-looking glass spheres — still isn’t complete. For now, just two buildings are ready for move-in, a company spokesman tells GeekWire.

The first is a 36-story office tower called Doppler, named after the internal codename for the Amazon Echo when it was under development. Doppler will look like a pretty standard office space, except with a rooftop dog park on the 17th floor.

This is one of three towers that will be warmed through Amazon’s ambitious plan to pump in waste heat from a data center across the street. The Amazon spokesman tells GeekWire that the system is up and running, and so far hasn’t had any issues.

The other facility coming online next week is simply called the Meeting Center — because it’s exactly that. It’s a shorter building that’s connected to Doppler by a covered awning and will house the company’s largest meeting space. It comes complete with fold-up stadium seating and a stage for corporate events. When the seats are retracted, basketball hoops fold down and the room’s cement floors become a full sized basketball court.

Combined, the Meeting Center and Doppler total 1.1 million square feet of office space. The Amazon spokesman says the move will happen in phases, and it will take some time before these new spaces are full. The company won’t be emptying out any existing buildings, but instead shuffling teams around and spreading people out.

This should be welcome news for many Amazon workers, as the company’s explosive employment growth over the past few years has caused some overcrowding issues — as GeekWire previously reported from complaints to the city about insufficient bathroom availabilities.

These are the first of many buildings Amazon will move into as part of its highly-anticipated expansion as it builds out the dense urban presence the company has been talking about for years. The new campus will span three blocks bounded by Westlake Avenue, Blanchard Street and Sixth Avenue, connected by a streetcar line to Amazon’s existing headquarters campus in the South Lake Union neighborhood.

One of the blocks said to be part of the expansion is currently being used as a distribution hub for Amazon’s rapid delivery Prime Now service, so it’s still unclear what development will happen there.

The defining feature of the campus, without doubt, is going to be the three glass spheres Amazon plans to open in 2017. The largest of the three spheres will sit 95 feet tall and 130 feet in diameter, which is about the equivalent of an eight-story building. The unusual buildings will be be filled with more than 300 plants, including full-grown trees. It’s designed as a place for Amazon workers to meet, hangout and share ideas. 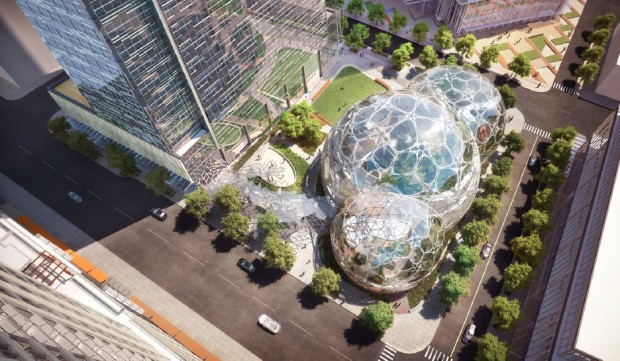 The Amazon spokesperson tells GeekWire the second new office tower will open in the summer of 2016, and the company will move into a new space every six to eight months from then on until the expansion is complete.