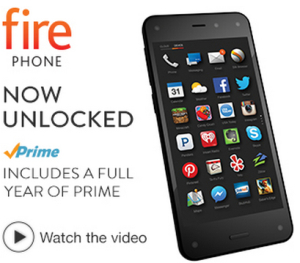 Amazon is now offering its lowest price yet for the Fire Phone in its latest attempt to drum up demand for the fledgling device.

The 32 GB device now costs $189 for an unlocked version that works on either AT&T or T-Mobile in the U.S. Including a full year of Amazon Prime (a value of $99), that essentially makes the phone only 90 bucks.

Amazon is marketing the price as a “bonus deal of the day,” so it may not last long, and it’s unclear how much it cost once the deal is over.

For the holidays, an unlocked version of the phone was marked down to $199. When the phone first launched in July, it cost $649 for an unlocked version, and $199 with a two-year contract. In September, Amazon issued the first round of reductions, marking the phone down to $449 without a contract and 99 cents with one.

The device’s launch has been a disaster. Not only did Amazon highlight features that consumers didn’t want, like 3-D displays, it was plagued by other poor decisions, most notably limiting distribution to AT&T.

This week, Fast Company reported that Amazon’s hardware group, Lab126, underwent a major restructuring, with a handful of executives leaving the organization over the past few months. A second report took a detailed look at exactly where Amazon went so wrong.

With so many incremental price adjustments, there’s not telling how low it will go.

Tell us, how much would you be willing to pay for the phone?