Amazon employees made their way into the company’s new Doppler office tower near downtown Seattle for the first time on Monday morning, free T-shirts in hand and blue name badges swinging around their necks.

“Good morning folks,” a security guard greeted them. “Make yourself at work.”

It’s a watershed moment for Amazon, as it marks the first building in the company’s highly anticipated new three-block campus, just north of downtown Seattle. Cranes have dotted the Seattle skyline for years, turning this massive construction project into the most visible symbol of the broader tech boom happening all around the city.

Amazon’s next building will come online by summer 2016; and then another six to eight months after that; then another. And that’s how it will go until the new entire 4-million-square-foot campus is full, an Amazon spokesman has told GeekWire.

It’s an ambitious growth plan as Amazon continues to sink its teeth into nearly every aspect of online life, from producing its own streamable Emmy-winning television shows, to building a voice controlled speaker that can help organize your digital life.

But instead of transitioning to a more suburban setting to grow a Microsoft-style campus, like most tech giants do at this point, Amazon CEO Jeff Bezos told investors at the company’s last shareholders meeting that he took a walk around Seattle and decided to do things differently. Amazon would build out a dense urban campus, where real estate is more expensive, but a new generation of employees can find all the walkable amenities they could dream of. 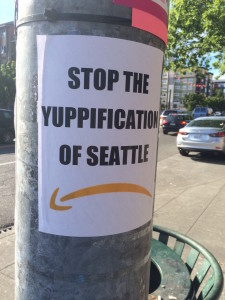 It’s a decision that sparked massive change all around Seattle and turned the the company’s neighborhood into one of the most booming tech scenes in the country. Office rents in the area have spiked 32 percent since 2013, as companies both big and small jockey for space within poaching distance of the biggest name in e-commerce.

Traffic congestion has reached unprecedented heights and Amazon, in large part, has become the face of what many people dislike about the way the region’s technology industry is changing the face of Seattle. Amazon, like its tech heavy-hitter peers, continues to struggle with issues surrounding diversity and work-life balance. And that baggage isn’t sitting so well with all the company’s neighbors.

But all of that is just background noise today, as Amazon presses on with a major milestone for that new urban campus it has been envisioning for so long.

Today just two buildings saw their big debut. The Meeting Center contains a large amphitheater with a stage, fold-up stadium seating and basketball hoops that can be lowered from the ceiling. It’s connected by a covered awning to Doppler, a more traditional 36-story office tower that sits next door. 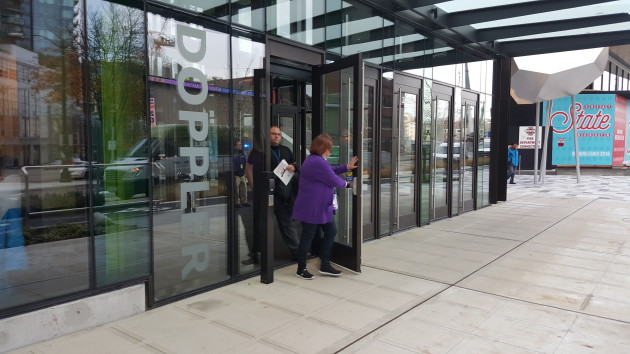 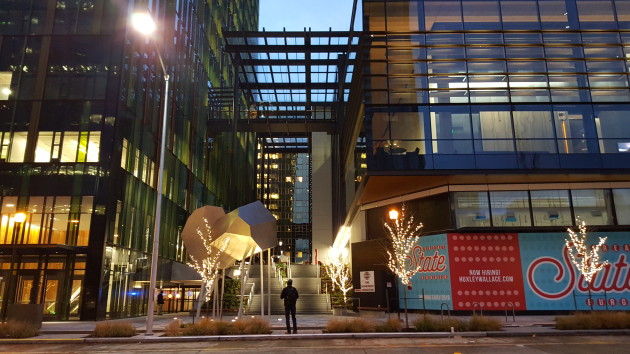 The company is marking the beginning of this massive expansion phase with an all-day open house for employees. Flyers give workers a map of the new spaces, showing them where they can go for live music, free food, video game areas, a hot chocolate station, cornhole, badminton courts and even a game of giant chess.

Most employees streaming in and out of the office said they didn’t work there, but were just coming to check out the new digs. One employee at a nearby restaurant said they were told to prepare for a rush as Amazon was filling 19 floors today, with the rest of the 36-story Doppler tower to fill up soon.