In addition to the company’s popular transportation service, Uber has also been aggressively experimenting with other uses for its technology over the past couple years to see how far its service will go. The company has delivered a variety of products, including ice cream, and kittens. Just last week, it announced that it will deliver goods from drug stores to customers in Washington, D.C. 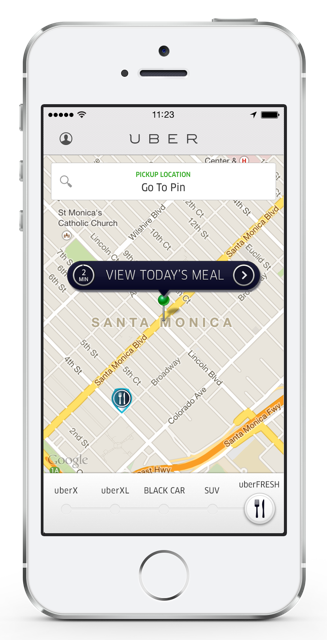 Now, the company is testing a new lunch delivery service called UberFresh in Santa Monica, Calif. Uber users will be able to tap an UberFresh button in their app and purchase a lunch meal from a local restaurant for $12 from now until Sept. 5. The menu for each day has been picked out in advance, and includes basic lunch fare – soups, salads and sandwiches.

Uber says that it does not charge delivery fees, nor does it require tip. But according to the Tender Greens menu, it looks like users will end up paying roughly $2 extra for the privilege of having their order delivered rather than going out to purchase it themselves.

Uber’s pilot program comes at a time when food delivery startups seem to be all the rage among entrepreneurs and venture capitalists. Sherpa Ventures co-founder Scott Stanford, who invested in Uber’s Series B funding round and also backs Munchery, told GeekWire in July that there is ample opportunity for an array of food delivery services.

“There are several startups going after food, but there are over 600,000 restaurants in the U.S.,” he said last month. “If the market has already proven that it can support that many restaurants, I would argue that there is room for one, two, five, or ten more coming at it from a completely different angle.”

UberFRESH is the latest move from Uber to try and diversify its services to compete with other companies that rely on the sharing economy. Postmates, a startup that also provides on-demand deliveries from couriers, already offers delivery from local restaurants through its app, though users have a broader variety of foods to choose from.