Ohio is known for a lot of things.

LeBron James. The Best Damn Band in the Land. John Glenn. The Amish. A river that once caught on fire. And, of course, Devo.

Now, my beloved Buckeye state has yet another claim to fame: The most die-hard Windows XP users in the U.S.

According to WebpageFX, the 7th most populous state in the Union also has the greatest percentage of people who are still using XP, the Microsoft operating system that’s being phased out this week after more than 12 years.

More than 11 percent of Ohioans are still using XP, followed by those innovative Hoosiers next door who still have 9.9 percent of the population on the OS. Maine, West Virginia, Rhode Island and Tennessee also have high numbers of Windows XP holdouts. 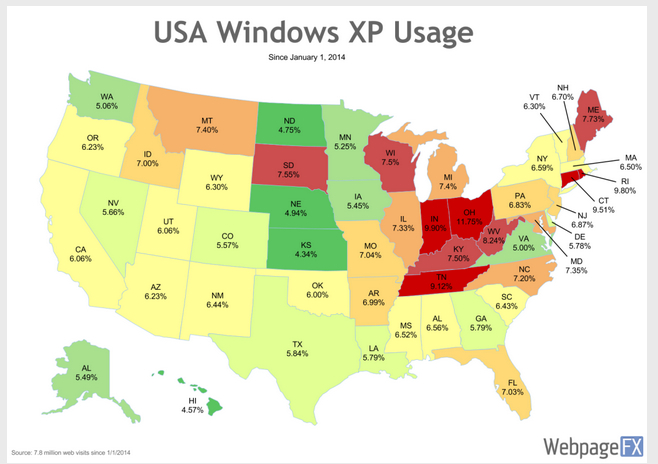 Now, as a native of Wooster, Ohio, I am seeing a correlation here between this study and one released last year by Seattle-based Marchex which found that Ohioans cuss more than anyone else. (See: Yes, I’m from frickin’ Ohio, and I cuss up a storm).

After all, you’ve got to let a few F-bombs fly when you’re running an operating system that was introduced in the first year of the George W. Bush administration.