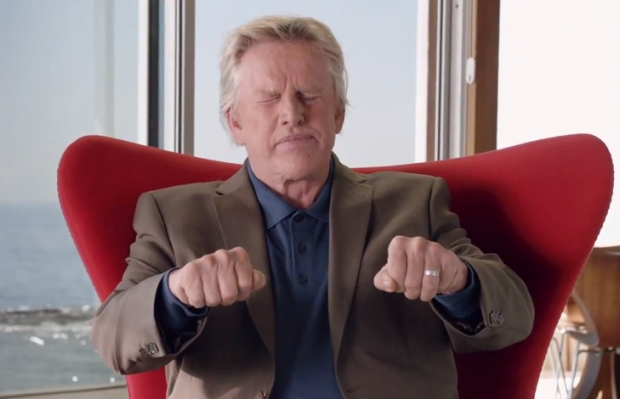 Amazon.com’s craziest celebrity spokesperson is back.

The 30-second ad, which you can watch here, begins with Busey holding a Fire TV Stick in one hand and a tiny seashell in the other.

“In one of my hands is something from Amazon so powerful it could entertain humanity for an eternity,” Busey says.

Busey then opens the hand with the $39 streaming device and shows how users can access apps like Netflix and Amazon Instant Video with the Stick.

Then Busey explains how, unlike the Fire TV stick, “you can’t play movies on a seashell.”

“You can’t even plug them in,” he jokes.

Amazon ends the ad by showing the $39 stick alongside the $99 Amazon Fire TV, the larger streaming box that Amazon launched earlier this year.

I have something joyful in my heart and something magical in my hands. #WhatsInBuseysHands http://t.co/7heiZltfT4

The Seattle online giant used Busey earlier this year in similar ads for the Fire TV that feature the comedian talking to himself.

The new spot debuted on Dec. 9 online and has just over 1,500 views. It played during the Seahawks vs. 49ers game on Sunday and has 164 total airings on TV, according to iSpot.tv.

For their next ad, I’m hoping Amazon uses Busey to show off the Echo, its intelligent talking virtual assistant.