Uber and the City of Portland cut a deal on Thursday, with the on-demand transportation startup agreeing to suspend operations in the city for three months to give regulators time to develop new taxi regulations.

The agreement comes after Uber had been operating in Portland for the past two weeks despite the city launching a sting operation against the company’s drivers, issuing a cease-and-desist order, and eventually filing a lawsuit against Uber for conducting business without the proper permits (there are 460 available for taxis in Portland).

Uber will stop operating in Portland this Sunday evening.

“Today, we are proud to announce that we have a commitment from Portland officials to create a regulatory framework for Uber within the next three months,” Uber Seattle General Manager Brooke Steger wrote in a blog post. “If regulations are not available by April 9, the City will allow ride-sharing companies to operate while they continue to pursue a long-term solution.”

The city has organized a task force to help review and update Portland’s private for-hire transportation laws to include regulations for services like uberX and Lyft, which allow people to use their personal vehicles to drive passengers around town. As Steger notes, if the city does not come up with new rules, Uber will be allowed to continue doing business.

Here’s more on how the city plans to do this:

The process initially will focus on taxi cabs and transportation network companies, with discussion and recommendations on the following areas: whether to continue to limit the total number of permits granted, whether to have a regulated pricing system, mandated criteria (including insurance, inspections and background checks), and accessibility. In addition, the task force will explore how regulatory changes could improve driver earnings and working conditions.

This is a change of pace for Uber, which rarely voluntarily leaves cities where it is illegal — it only did so once prior in Vancouver, B.C., two years ago — and typically only suspends operations after legal rulings (Nevada) or issues with drivers allegedly raping passengers (India). 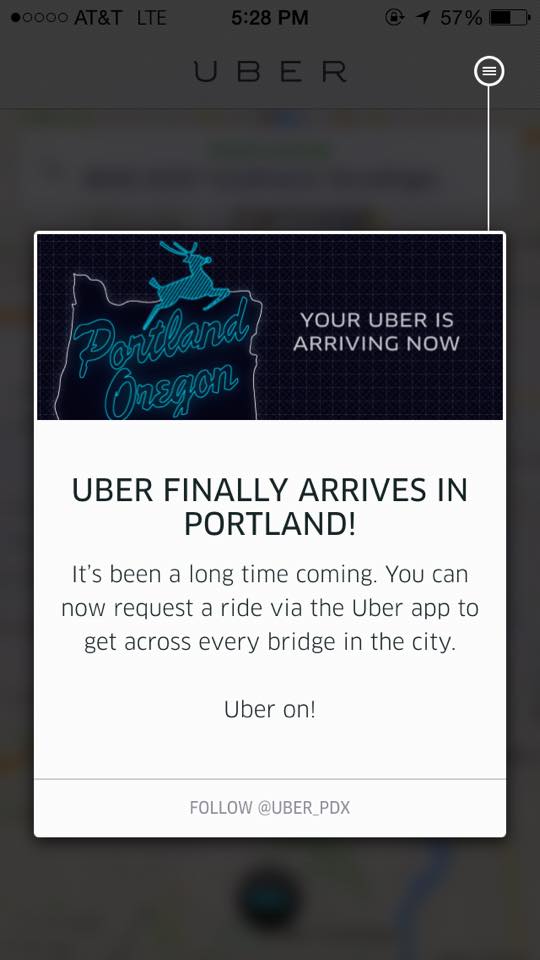 The company, which just raised another $1.2 billion at a massive $40 billion valuation, vowed to be a “smarter and more humble company” in a recent letter penned by CEO Travis Kalanick.

“Fortunately, taking swift action is where Uber shines, and we will be making changes in the months ahead,” Kalanick wrote in a blog post. “Done right, it will lead to a smarter and more humble company that sets new standards in data privacy, gives back more to the cities we serve and defines and refines our company culture effectively.”

Uber will continue operating in four cities surrounding Portland, but will not pick up passengers within city limits. The Willamette Week notes that Uber will pay its drivers an extra $5 for fares that end in Portland, since those drivers won’t be able to pick up a return fare.

Last month, the Portland Bureau of Transportation found that demand for taxi rides is exceeding supply and in response temporarily lifted restrictions to allow for more taxi cabs. The demand is not too surprising given a recent study from the R Street Institute that found Portland’s transportation options to be lackluster compared to other U.S. cities.

It’s been interesting watching Uber handle its business in Portland. The company often sets up shop in cities without first becoming regulated — it did so in Seattle before laws put into place this past June — but stayed out of the Rose City for nearly two years as it tried to negotiate with officials.

But then on Dec. 5 it surprisingly launched in Portland, much to the disdain of Mayor Charlie Hales and other city leaders. Now, though, the two sides appear much closer to a truce.

Back in August when we met with City Commissioner Steve Novick, he noted how creating rules for companies like Uber wasn’t a high priority for the city. That’s certainly changed now.