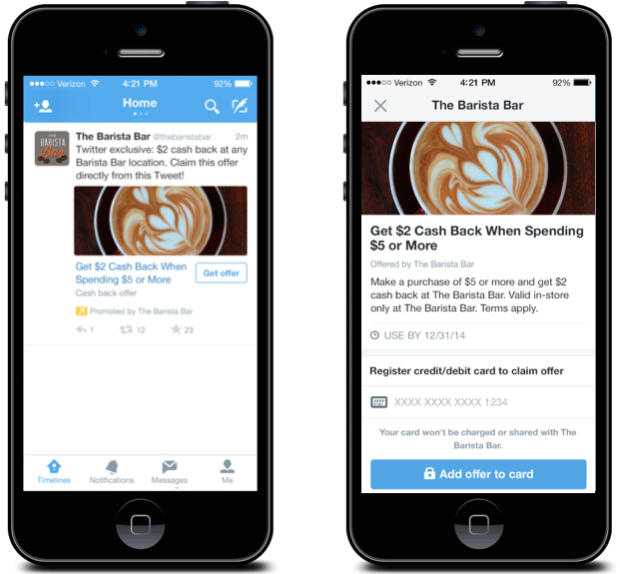 The company rolled out a new Offers feature today that lets businesses promote their wares by offering Groupon-style deals on the social network. People who see an ad from a business for one of the offers will be able to purchase it with their credit or debit card, right from Twitter. Once users purchase one offer, their card is linked to Twitter so that they can purchase the next one with just a tap.

Users who purchase an offer will have it linked to the credit or debit card that they used to buy it. Once they go into a store and offer up their card, the point-of-sale system will automatically take that into account by giving them a credit on the purchase. Twitter says that retail employees won’t need to be trained on the offers in order for them to work, either.

It’s an interesting proposition, especially with Black Friday fast approaching. Holiday shoppers will be keeping an eye out for the best deals, and it seems like Twitter could be a new avenue for finding them. It’s also a way for businesses to track how well their Twitter ads are doing, based on how well the deals are performing.

This is a move by the company to expand its e-commerce offerings, after it began allowing retailers to sell products directly through the service in September by enabling a “Buy” button on certain tweets.

In addition, attaching credit cards to accounts could be a boon for Twitter as it goes forward. Having its social users turn into potential customers for advertisers could be a good way for the company to drive adoption of its revenue-generating products.

This new feature comes at a time when it seems like every social network wants to get into the commerce and money transfer space. Facebook is reportedly gearing up for a mobile payments push in its Messenger app, and Snapchat recently unveiled Snapcash, a way for people to transfer money between their friends on the ephemeral messaging service.