If you’re like me, family dinner time is usually a mad scramble to find something to eat, typically resulting in a trip to the local Thai restaurant, burger joint or pizza parlor. And I’m not alone. About 60 percent of families don’t know what they’ll put on the dinner table that night.

Former Starbucks executive Mary Egan feels your pain. And she’s here to help with a new startup called Gatheredtable — an online service that automatically generates a menu of weekly meals, tailored for your families’ preferences. 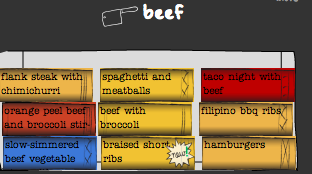 Don’t like salmon? No problem. Allergic to nuts? Not an issue.

Egan, a mother of three, came up with the idea when planning meals for her own family.

“Our mission is to foster the creation of homemade meals by identifying and removing some of the root causes that make them hard to achieve for busy households,” said Egan. “What we know from the research we’ve done is that people really like to cook, and one of the reasons they don’t cook more often is because of all of the work involved.”

“We know there is a real gap between the aspiration and the reality when it comes to making homemade meals,” she said.

In early tests, Egan said that customers saved, on average, about an hour of time each week making meals.

The service will cost $10 to $12.50 per month, allowing families to clip online recipes and set preferences. From there, families get a weekly individualized menu with certain meals slated for specific days of the week. Customers indicate how many days per week they’d prefer to cook, and how much time they can commit, and then the Gatheredtable algorithm gets to work spitting out recipes based on food preferences.

For a one-time fee of $125, families also can have a Gatheredtable “concierge” come to their home to inventory food in the pantry and help enter recipes into the online system. Concierges will log everything from oils to spices, helping to make it easier for busy families to figure out what’s best to cook each week.

That service, which Egan describes as a niche product, is only available in six cities now with plans to expand to about 15 this summer. In addition to food inventory and recipe management, the Gatheredtable concierge also will act as a “dinner host” for members. The dinner host will provide the food and make dinner while the Gatheredtable member supplies the wine and invites a few family friends who might want to participate in the service.

The service is available now in private beta, with a full launch slated for May. Later this year, Egan said that the company plans to integrate the weekly menus with online grocery delivery services, potentially taking a small referral fee for passing on the business.

Egan formed the company last summer, raising cash from Starbucks CEO Howard Schultz, Seattle super angel Geoff Entress and others. To date, the 16-person company, based out of Seattle’s Smith Tower, has raised $1.8 million, with Egan saying that they’ve had to turn down investment from angel investors who want a piece of the deal.

In the case of Schultz, he quickly made up his mind. After showing the coffee czar a short video of the concept, Schultz immediately said that he wanted to invest.

Gatheredtable certainly faces plenty of competition, with no shortage of online recipe and family scheduling applications. Just in Seattle alone, there are services such as AllRecipes.com, BigOven and Cozi to help families better plan meals.