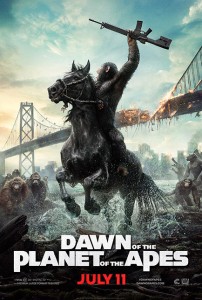 Matt Reeves, the director of “Dawn of the Planet of the Apes,” had a problem. The final shot for his $150 million movie wasn’t working, and he needed a new one, stat.

The team at Weta Workshop, which did the animation for all the film’s apes, said that he needed a new motion capture performance from Andy Serkis, who plays Caesar in the movie. So, Reeves decided to give Serkis a call on Skype, according to a report by Slashfilm.

“So we did a thing where Andy was in London and he was at [his performance capture studio] the Imaginarium,” Reeves said. “And we hooked up via Skype and I looked at a big plasma and I talked him through what was going on in that last sequence as he’s coming down those steps. And we basically did it over Skype.”

That’s right: the final shot in “Dawn” was created by Serkis, in London, acting under the direction of a guy who was thousands of miles away and watching the performance through a video connection on the Microsoft-owned Skype service.

Of course, we know how the story ends: Reeves shot the video off to Weta, which turned around a new version of the scene and finished the film.

It’s not the only scene that Reeves directed that way: Serkis was able to work out of his London studio, while acting across from Jason Clarke who was in a hotel room in Rome on one occasion. Another scene involved Clarke and Keri Russell acting in Manhattan Beach, and playing against Serkis, who was on Skype.

Reeves isn’t sure if this is the first time a movie has shot scenes over Skype, but it’s the first time he has done anything similar. But as more movies use CGI and motion capture performances, it looks like directing over the internet might be a way forward.